'The Nearest Thing to Eternal Life on Earth is a Government Program!' 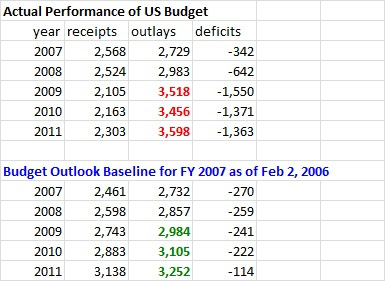 Federal budgeting can be very confusing at times.

But at its core, it is very simple arithmetic. As in 'addition and subtraction'. No advanced calculus required, ring theory or Boolean algebra. Just 1+1=2. Or preferably if you are a spending budget hawk: 100-50=50 as in 'reduce many federal programs by 50%...and hardly anyone would know the difference'.

Take a look at how President Obama's economic stimulus has been recorded in official CBO documents in the summary chart here. (We don't make this up out of thin air, you know)

As of the year 2006, the projections for federal spending (bottom chart titled 'Budget Outlook Baseline') for the next year, FY 2007 and the next five years looked 'pretty normal': 4.4% growth one year; 4.2% the next..somewhere in the 4%-4.7% vicinity for as far as the eye could see. 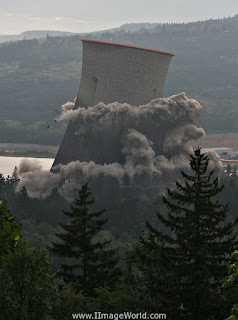 Well, 2008 comes around and the banking system melts down like Three Mile Island or Chernobyl.  All hell breaks loose and in 2009, President Obama and the Democratic Congress pass their stimulus bills and federal spending leaps $534 billion to $3.518 trillion in just one year.

A whopping 18% increase in one single fiscal year.

Truth be told, some of this bailout expense started under President Bush in the fall of 2008 before President Obama took office but Nancy Pelosi was Speaker of the House and Harry Reid was Senate Majority Leader. Had the Republicans stayed in control of Congress, much of this initial outlay may have been about the same amount of money.

But would it have stayed as high for this long?

Typically, 'stimulus bills' are passed in a year with the hopes they will work and then they evaporate so the baseline could return to its normal trajectory.

Well, we have had an amazing amount of stimulus spending that simply has not worked to reinvigorate the economy and stimulate the creation of millions of jobs that typically happen coming out of a recession, deep or shallow...and the high increased level of federal spending hasn't 'evaporated' yet to allow the baseline to fall back to its normal trajectory, has it?

Take a look at the actual performance of the budget for 2010-2011.  According to the 2006 projection, federal outlays in 2010 were 'expected' to be $3.105 trillion.  Actual federal spending totaled $3.456 trillion, $351 billion above baseline expectations just 4 years previously and not much less than in 2009, the BIG YEAR of stimulus spending and TARP bailouts. (see TARP for a detailed mind-numbing discussion of how The Credit Reform Act of 1990 deals with present-value accounting of the TARP cash flows)

What the heck does this all mean?

It means that we have not returned to the baseline projections of 2006 yet and probably won't for quite some time, if ever.  The baseline took a sharp 11% stair-step up in 2009.....and has stayed there for the last two years.

That is a $1.231 trillion accumulated hike in the underlying baseline that will probably never be allowed to go  back down to the normalized baseline of 2006.

Because all of these programs are now deeply embedded into the American governmental structure. As we all know, NO federal program ever gets eliminated once it is put into place. NO federal program ever suffers an absolute real cut from this year's levels because of baseline budgeting (which always projects an overall increase of at least the expected inflation rate plus 1%-2% in future overall growth in federal spending).

As Ronald Reagan used to say: (take your pick, they are all choice quotes)

This time, the crisis of 2009 helped ramp up overall federal spending to a much higher baseline level than before...and no one is talking about it right now.

Our tax receipts will never catch up to the rate of growth in spending until spending growth is held below the rate of inflation for at least 5 years running.

That is what the next President can help achieve.  Even if he just pushes the veto button on his desk on every spending bill that gets there from Congress.

Who do you think will do that....President Obama (who has vetoed only 2 bills total in 4 years in office, second fewest in American history behind only James Garfield who served for only 200 days in 1881 before his assassination) or Mitt Romney who vetoed at least 800 bills during his four years as Governor of Massachusetts?

It is your choice.


*Some more choice Reagan quotes to use whenever you want:

"I've laid down the law, though, to everyone from now on about anything that happens: no matter what time it is, wake me, even if it's in the middle of a Cabinet meeting."

"It has been said that politics is the second oldest profession. I have learned that it bears a striking resemblance to the first."

"Government's view of the economy could be summed up in a few short phrases: If it moves, tax it. If it keeps moving, regulate it. And if it stops moving, subsidize it"
Posted by Frank Hill at 7:55 PM