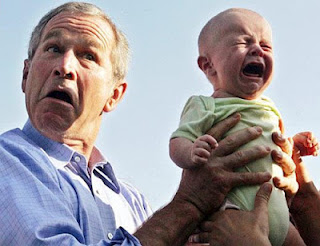 Here's some data we recently 'discovered' that tells the 'true' story of America under the second 4-year term of George Walker Bush, our 43rd President who served for 2 terms.  His first term was consumed by 9/11, Iraq and Homeland Security, that is for sure.  But take a look at his second term from 2004-2008 through these eyes:


You will notice we use a lot of parentheses in these postings to connote a sense of 'humor', 'sarcasm' and 'falsehoods' at times. Sometimes we use the ' just to make sure you are paying attention.

If you found yourself nodding in agreement as you read the 33 points above about the 'abysmal' Bush record as president, then you might want to consider just how objective you are in your political philosophy and general outlook on life.

Because these 'facts' noted above are exactly what has happened under President Barack Obama during his first four years as President, not Dubya's.  We have just changed the names and the tenses of the words to make it look and sound like 'it really was all W's fault!' that Obama inherited a terrible economy and all of the other blame he has sought to cast on his predecessor for the past 4 years.

Well, you know, President George Bush was dealt a low blow just 8 months into his Presidency on 9/11, remember? Things were going pretty well since that the economy was coming out of a mild recession at the end of the Clinton Administration (we are gonna have recessions and booms in America as long as we have a capitalist system you know) and then all hell broke loose when those planes hit the Twin Towers in NY and the Pentagon in Northern Virginia.

Did he spend 4 years blaming Clinton for not taking more concerted action against Osama Bin Laden and Al Qaeda and giving him a crummy economy to start with?  Nope. Our very best Presidents have never looked back and blamed his predecessor.

Lincoln didn't blame the feckless James Buchanan for 4 straight years for doing absolutely nothing to avoid the on-coming Civil War.  Buchanan, our only bachelor President, showed his mettle for leadership (or lack thereof) by leaving Lincoln a note in the desk in the Oval Office that read: 'My dear sir, if you are as happy on entering the White House as I on leaving, you are a happy man indeed.'

Our point here is to point out the differences in the public perception and media coverage of the same office but decidedly different men and different political parties.  We remember the media going absolutely BONKERS in the fall of 2008 over the fact that gas prices were rising from $1.81 a gallon earlier in the Bush Administration to $3.80/gallon during the McCain/Obama campaign and it was 'all W's Fault!'

All of it, which is sort of hard to believe, isn't it?

Well, today under President Barack Obama, it is $3.81/gal and heading towards $4.00/gallon and nary a peep out of the mainstream media anywhere as far as we can tell.  Families are just as hurt in the wallet now by filling up their gas tanks with $50-$75 worth of gas every 10 days or so as they were in 2008...what is the difference between 2012 and 2008 other than the fact that we have an African-American Democratic President today versus a white Caucasian Republican President then?

There must be something else going on nowadays where the same set of facts can elicit such a different reaction from people. Is it the fact that President Obama is our first African-American President in our history and people are willing to cut him some more slack than a white Caucasian President such as W?

Is it that America has suddenly become a center-left nation after almost 2 centuries of being a center-right nation politically? Or is it because the news media and polling firms have become so ardently liberal and extreme in their political outlook skewing to the left (in most cases) that they selectively chose to present the same set of facts in a positive light for President Obama because he is a Democrat whereas they would have excoriated and eviscerated W for having exactly the same set of records under his watch?

Maybe it is time for us all to step back and actually take Martin Luther King's inspiring words to heart when he said: 'I look to a day when people will not be judged by the color of their skin, but by the content of their character.'

We think character issues are important but we think it is far more important in this crucial election to look at the executive management abilities of each candidate above basic decency issues. Leadership ability as in 'bringing people together' to get to some common-sense solutions for everyone, not just one faction or another, is a crucial component of electing a president. Having a deep understanding of how to balance budgets and how free enterprise works at the core level is essential to getting this economy growing once again so everyone who wants to work can find a job, don't you agree?

We are asking people to look at the facts and make up their own decisions based on them, not what the media tells you to think or even some blogger like me.  Not only for the presidential race but for the US Senate races now up for grabs in 34 states; the US House races and every race down to dogcatcher, if they still have elections for those nowadays.

If you can take a look at the above list of economic statistics and honestly say in your heart of hearts that you are proud of President Obama's economic achievements and that he has America 'on the right track', then by all means, vote for him in November.

If you don't think he has done a great job as our Chief Executive, you can either vote against him or for Governor Mitt Romney, take your pick. One way or another, you'll be expressing your dissatisfaction with the job performance of Barack Obama over these past 4 years.

One wag on a sports show commented after Art Shell was hired as the first African-American head football coach in the NFL to lead the Oakland Raiders in 1989: 'We will really know when some sense of equality is achieved in the NFL when black coaches are fired for their record with the same regularity that white coaches are.'

A Sports Illustrated article in 2011 contains these astounding American words, not black, not white, not Latino but American in nature:  'As black coaches lose more games, Madden and other supporters nod with satisfaction. This "drop-off" is the ultimate validation of the Rooney Rule, an indication that black coaches are being held to the same standards as their white counterparts.'

President Barack Obama now has a 4-year record just like George Bush 43, George H.W. Bush 41, Bill Clinton and every other President going back through FDR to Lincoln to George Washington himself.

Hold him to the same standards you would hold any other President.  It is your choice.

* thanks to Ben Hart for compiling this list
Posted by Frank Hill at 5:12 AM