Washington state in the summer is the place to be if you are from hot, sticky, humid North Carolina. So is Maine. 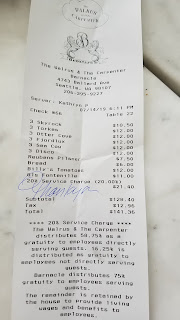 The high at Hurricane Ridge in the Olympic National Forest last Friday was a chilly 49 degrees. Seattle never got above 70 while we were there.

When we travel to moderate climes to escape such uncomfortable heat, we try to find great restaurants that serve simple food made very well. The Walrus and Carpenter in Seattle came highly recommended so we went.

Seattle is one of the large cities that has mandated a $15/hour minimum wage for everyone who works in Seattle. While it might be a “cool” place to live in terms of lifestyle, ambiance and temperature, it might not be the “coolest” place to live if you are running a small business like a family restaurant.

When the bill came, the following explanation was attached at the bottom about why there was a mandatory 20% “service charge” included in the bill.

Essentially, the city council of Seattle raised everyone’s restaurant bills by 20% to pay everyone the $15/hour minimum wage.

On top of that, the fresh oysters cost up to $4 apiece. They were great, but for our money give us a bushel of fresh Harker’s Island North Carolina oysters instead.

A conversation could have ensued between me and the waitstaff person but due to family considerations, such conversations have to be imagined instead:

“So, tell me about this 20% service charge. Do you get it whether you are great at what you do or not?”

“Yes, that is about right.”

“If we thought you were great and wanted to give you a 25% tip solely because you were such a great server and give you $25 alone, that would have to be paid on top of the mandatory 20% service charge, right?”

“How does that make you feel as a hard worker?”

“Do you want another Rainier, sir?”

“I got another question. These oysters are pretty danged expensive. I guess they have to be to cover the $15/hour minimum wage here in Seattle, huh?”

“What happens to the less expensive restaurants where the total bill for dinner comes out to, say, $20 instead of $120? How do they pay the $15 minimum wage when 20% of their bill winds up being only $4? What if they can’t sell enough $20 dinners in an hour to be able to pay a waiter or waitress $15 for that hour of work?”

“You are losing me, sir. I didn’t major in economics in college.”

“You don’t have to. If a business can’t produce over $15/hour in revenue to cover the $15/hour minimum wage for each employee, they won’t stay in business.

“How many people are going to be thrown out of work at thousands of Seattle establishments because it costs too much to pay people $15/hour when they can barely afford to pay them $7.25/hour as it is? We just saw a totally automated McDonald’s in the Sea-Tac airport.”

“Not everywhere. We just got back from Kalaloch where the waitress said they don’t have a $15 minimum wage. ‘We have great weather, great views and great fish,’ she said. ‘Enjoy it. I do.’”

“Maybe everyone will move to Kalaloch, then, sir.”