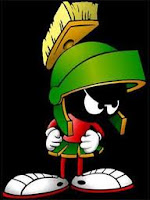 There comes a time in every political issue when the tide turns and the attack ads from the past lose their sting.

Such is the case today with the tired old ‘They are going to take away YOUR Social Security, Seniors!’ attack ads hurled against conservative Republicans by staunch Democrat candidates and defenders of the status quo.

And in Florida, these pathetic attack ads are being hurled by not only the Democrat candidate, Congressman Kendrick Meek but by the current sitting governor and former Republican, Charlie Crist, against the ‘new face’ in national politics, Marco Rubio who is going to be the next Senator from The Great State of Florida.

Frank Luntz, a national pollster, once did a poll that came back with this startling conclusion:  More Americans under the age of 50 at the time believed in space aliens, (not illegal aliens) than they believed they would ever receive their full Social Security benefits in retirement.

Score one for Marvin Martian.

That poll was conducted close to 20 years ago.

That means that those very same people in the younger Boomer age cohort and the following Generation X and Millennial groups of American voters are now 20 years older or close to 50-60 years of age now.

(There is a tremendous, great book called 'Generations' by Neil Howe and William Strauss that you have got to read. They forecasted this inter-generational transition of beliefs way back in the early 1990's, almost 20 years ago)

It also means that the ‘Greatest Generation’ of WWII and Great Depression-era Americans are in their 80’s and 90’s now and diminishing in numbers every day, unfortunately.  Many of this cohort of voters want absolutely no change to Social Security and have been misled over the years from the AARP to believe that any changes in the future, such as raising the retirement age, would mean taking money out of their pockets.

Now, how can an 85-year old person be worried about raising the retirement age to 70?  They are already 15 years past that age threshold and completely grandfathered and grandmothered into Social Security as it is today!

So when the advisors to Senate Democrat candidate, Congressman Kendrick Meek and Independent candidate Governor Charlie Crist started wringing their hands with glee and ran millions of dollars of ads against Mr. Rubio who says he will vote to raise the retirement age in Social Security once elected, they were just wasting their time and their contributor’s money.

Because they are talking to a majority of voters who believe more in space aliens and have already accepted the fact that they are not going to get their ‘full’ SS benefits anyway!

Hardly anyone now below the age of 60 truly believes they are going to get all these promised benefits, in SS or Medicare.  We have seen the debate for 30 years now and nothing has happened in the interim that leads anyone under 60 years of age to believe either SS or Medicare has been ‘fixed’ by anyone in Washington.

So save your money from now on, ‘Mr.-Bash-People-In-The-Head-If-They-Even-Talk-About-SS’ political advisor.  Marco Rubio is going to win the Florida Senate seat by a comfortable margin as the first truly ‘generational change’ elected Senator in the US Congress.

And guess what?  Did we mention that he is going to be elected from the Great State of Florida, home to millions of senior citizens, despite his support of a higher retirement age?

The times they are a-changin'.
Posted by Frank Hill at 8:31 PM