So…What Does This All Mean Now? 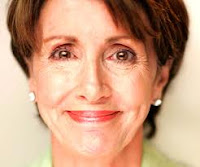 Now that Nancy Pelosi has been fired as the first female Speaker of the US House by the American voter and the Republican Tea Party has taken control of the lower house of Congress, what exactly does that mean to you and the country starting this morning?

For one thing, it means that the days of passing massive spending bills like the Obama stimulus package and ObamaCare are over. Certain parts of each bill will come under attack and be rescinded by the House, most likely, but the efforts will probably not pass the Democratic-controlled Senate or be signed by President Obama (more in later posts).

Gridlock is back in the United States Capitol and after a decade of spending unrestraint from either party, it didn’t come back a moment too soon. Go ahead...you can admit it that you are glad to see Mr. Gridlock back in our nation's capital once again.

But really, what does this mean for me and you and the people on the street, both currently employed and unemployed?

We are going to engage in a relatively brief, yet informative series, probably for the rest of this year, that we like to call ‘Reality-Based Politics-101’.

In it, we are going to give you the basic truths of the US federal budget/tax policy and health care issues that actually mean something to you and your family’s future.  We will bring in some expert opinions and creative ideas for your to consider and ponder.  We will not engage in any ‘wishful thinking’ or Santa Clauswitzian dream world where you are ‘given everything by the federal government without any cost to you as a taxpayer!’

Those days of politicians acting like Jon Lovitz as ‘Tommy Flanagan- Pathological Liar’ on SNL (‘Yeah, yeah…that’s the ticket!’), or some loud-mouthed used car salesman promising you 'incredible deals' on television ads, are over.

So beyond the end of passage of any new massive spending program in Washington, what else can you reasonably expect?

We think this election just about guarantees the passage of the extension of the Bush tax cuts on a double-tiered basis in the lame duck session between now and the end of the year.  The middle-class tax cuts will be passed on a permanent basis and the tax cuts for the wealthy will be extended for the next year at least and possibly, two as a way to help get us out of this nasty recession that doesn’t feel like it is over as the economists claim.

Even a lame-duck Congress and a weaker President Obama can see that not extending these tax cuts in such a weak economy would do far more harm than good.

But guess what else the newly-elected Members and Senators have ‘won’ as a result?

Extending or making the tax cuts permanent will increase the federal deficit projections officially on January 1, 2011 by ANOTHER $2 trillion or so the day it is passed.

To put it very bluntly, if you are at all concerned about the burgeoning national debt, we will have increased the amount of debt we will incur at the very same time a whole new crop of ‘fiscal hawks’ will be coming into Washington to ‘reduce those bloody deficits and the national debt’ in the first place!

Talk about a confusing electoral message the voters are ‘sending to Washington’!

So now, instead of digging out of a projected national debt of ‘only’ $14 trillion as of today, this whole new crew of energetic eager beavers will have a Sequoia tree of debt of close to $16 trillion to start gnawing away at right off the bat on January 1, 2011.

Congratulations and welcome to Washington!

That is reality-based politics at its finest, ladies and gentlemen…so you better get used to it.  You are going to see a lot of it over the coming weeks. We’ll try to help you understand it all so you can contact your representatives and put pressure on them to ‘do the right thing’, whatever that is nowadays.
If you are ecstatic about last night’s elections, enjoy it as long as you can.  Because there is some serious heavy-lifting and decision-making about to come your way.
Posted by Frank Hill at 4:47 AM