What Comes First…‘The Chicken’ of Consumer Demand or ‘The Egg’ of Job Creation? 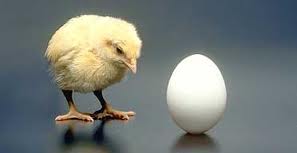 We have had some pretty interesting exchanges with people on both sides of the political philosophical spectrum since finding jobs for the nearly 20 million unemployed, under-employed or just plain ‘gave up looking for employment’ Americans is on everyone’s minds right now.

That is a stupendous number when you think that at the depths of the Great Depression, nearly 13 million of the adult male workforce (women did not work in large numbers at the time) were unemployed.

It will make a huge difference who you vote into office on November 2 as to which way our nation will take to get people back to work and our economy running on full cylinders once again.

Granted, the 13 million unemployed in the Great Depression represented 25% unemployment among adult males in a smaller national population of around 125 million when compared to 2010’s US population of 310 million. Still, 20 million people looking for substantive sustainable work nowadays is eye-popping.

So how do we get all these people employed again?

We have been advocates for completely eliminating the US corporate income tax code at the federal and state levels for quite some time now. It is an onerous, out-dated, duplicative and mind-bending Byzantine maze of complexities that yields minimal revenues to governments in terms of proportion to the overall amount of money collected by the tax authorities each year (and virtually nothing in a recession like the humdinger we are still dealing with)

The corporate income tax basically tends to enrich smart, clever lobbyists, tax accountants and lawyers who spend all their time devising ways for corporations to avoid sending more tax money to Washington and the state capitols than is absolutely necessary.

We believe abolishing the double-taxation that is inherent in the corporate tax code would open America up to a massive expansion of investment and job creation unlike any we have seen since the internet boom of the 90’s. Or perhaps the industrial boom that followed WWII as the US rebuilt the economies of the entire world in essence. We think industries that are not repelled by excessive regulation of their business will return to set up shop in the US once again to take advantage of what could be close to a 50% gain in retainable profits and earnings. Elimination of the corporate income tax would do a whole heckuva lot to offset lower wages overseas.

When oil prices hit $100/barrel; $200/barrel or perhaps $500/barrel, don’t you think many of these industries will be absolutely dying to get back to American soil and lower their shipping costs once again? In many cases nowadays, the shipping cost to America equals the cost of production overseas. Abolition of the corporate income tax would get them back that much sooner.

Here’s our main question when it comes to long-term ‘real’ job private sector creation in America today: ‘What comes first: people having enough money to ‘create demand’ for a product or service or an entrepreneur or inventor who sees a need in the market for a new product or service and then proceeds to invest to develop it into a usable product and hiring people to help make it and sell it to the public?’

We think it is a blend of both, which makes the free enterprise capitalist system almost as amazing to see in action as the human body is with all of its intricate processes and systems like the eyeball or the brain. (Experts say we use less than 10% of our brains which sure explains the last decade in politics, doesn’t it?)

There can be no ‘demand’ for any product if people don’t have money or the means to pay for it. People would just go to stores or on-line and look at all the wonderful I-Pads and I-Pods (all made in China now, by the way if you are keeping score at home) and marvel at them...and never pay for one.

On the other hand, people did not even know they had the ‘demand’ for a PC in 1979 until Steven Jobs and Steve Wozniak invented the first Apple 'personal computer' in a garage in what was soon-to-become known as the Silicon Valley in California. If you don’t have a laptop or a cell phone today that could probably launch a rocket to Mars with its computer memory, you really are considered ‘destitute’, aren’t you?

We tend to fall perhaps 85% on the side of the Golden Egg of Job Creation as being generated from the minds and efforts of entrepreneurs and risk-takers in America and God bless them for being so! There are millions of businesses that have been created over time in America when brave souls have borrowed money from friends or family or mortgaged their house to the hilt and hired other people to fulfill their mission and dream.

Some, or perhaps many, of them were the ‘C-students’ you sat next to in high school and have gone on to succeed and become billionaires and hired hundreds of thousands of other Americans in the process.

We think there is a completely new bow wave of products and services out there just waiting to be invented like perhaps cures for cancer that come in bubble-gum form (Why the heck not? Polio was ‘cured’ with kids eating sugar cubes!) or cars that fly on hydrogen like in the Jetsons cartoons.

Let’s abolish the corporate income tax; put some responsible adults back in office in Washington and the state capitols; run government in a more responsible manner, get out of the way and let these entrepreneurs do what they are good at….creating products, services and new jobs, all at the same time.

We will all benefit from that, don’t you agree?
Posted by Frank Hill at 6:38 PM

Email ThisBlogThis!Share to TwitterShare to FacebookShare to Pinterest
Labels: Apple Computer, Chicken or the Egg, jobs, The Great Depression of 1929