Can Republicans win back the African American vote? 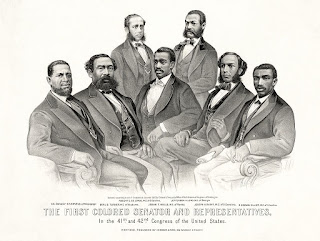 You might be scratching your head and asking: “When did the GOP ever have the African American vote to begin with?”
The Republican Party has been joined at the hip of African American freedom since before the Civil War. The same strands of philosophical belief that underpinned Republican belief then — freedom, equality, individual responsibility and opportunity for everyone in a vibrant free-market economy — underpin the Republican Party today in clear contradistinction to the freedom-crushing socialist policies of the modern Democrat Party.
Young African Americans are unaware of the close historical tie between the Republican Party and the first civil rights movement in America for many of their ancestors. They have been taught and told that Republicans support only old rich white men and big business and could care less about justice and equal rights under the law.
A young African American student said I was the first white Republican she had ever met and talked to in-depth. She was 21 years old at the time. “I grew up in a little rural town in eastern North Carolina. I went to an almost all-black high school in Wilmington, and I am about to graduate from North Carolina A&T University. Where would I have met a white Republican to talk to about political philosophy anywhere along the way, Mr. Hill?”
Had there been no Republican Party running the country after the Civil War, Southern Democrats never would have allowed even the brief decade or so of freedom and enfranchisement for former slaves during the 19th century.
Republicans in Congress passed the 13th Amendment, which abolished slavery in 1865; the 14th Amendment, which granted full citizenship rights and protections to 4 million former slaves; and the 15th Amendment, which prevented states from denying voting rights for black citizens.
A Republican Congress overrode President Andrew Johnson’s veto of the Civil Rights Act of 1866 which eradicated laws in the South that prevented blacks from owning property, making contracts and filing lawsuits.
Former Union general and two-term Republican President Ulysses S. Grant was so committed to protecting the freedom of the former slaves he sent federal troops into states such as Louisiana and Mississippi to annihilate white supremacy groups like the KKK, White Line and White League that were not only suppressing the black vote but killing thousands of innocent citizens in the process.
Once black voters were protected at the voting booth, more than 2,000 black men were elected to serve in public elective office across the South during Reconstruction, every one of them Republican. More than 600 were elected to state legislatures. Two black U.S. senators were sent from Mississippi; 16 black congressmen were elected from other states.
Back then, Republicans could count on nearly every Southern black vote in every election and received most of the black vote until 1936. Republicans running for president today are lucky to get 5% of the black vote.
If a Republican presidential candidate could ever garner the support of 18-20% of African American voters nationwide — 6% more than Bob Dole received in 1996 — it would be impossible for a Democrat candidate to win the White House in 2020 or any year thereafter.
Younger African Americans are not as monolithically Democrat as their parents and grandparents; 15% of black voters are registered unaffiliated, most of whom are under the age of 40. They can see the failure of massive government programs, albeit well-intentioned, to help many in the African American community as well as anyone.
As a senior black Republican adviser has said, “African American voters have to like Republicans first before they will listen to any of their policies or targeted political messages. Who will be those Republicans?”


Perhaps a look back into the intertwined history of the Republican Party and African Americans will give common ground to begin those friendships and discussions. Times change and so do political preferences; nothing stays the same forever when it comes to politics in America.