America Should Have Many More Billionaires, Not Less 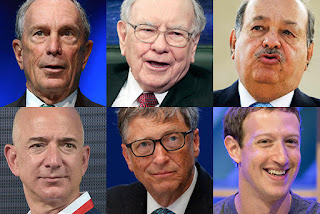 Democrat presidential candidate Sen. Bernie Sanders tweeted this out last week before he entered the hospital with a heart ailment:
“There should be no billionaires!”
He is wrong. There are close to 585 billionaires in America today. America should strive to have more billionaires in America. Many more.
China is next with 476 billionaires, despite their so-called “communist” system. India has 131 and Germany has 114; there are about 1,000 billionaires sprinkled in the other 191 countries.
What does it mean when a person is able to amass a fortune over $1 billion? It means that they probably started a ground-breaking company such as Jeff Bezos did with Amazon, usually out of nothing other than a pipe dream in their head, and then executed a business plan worldwide to provide a product or service millions and billions of people across the globe want to buy.
It doesn’t mean they “stole billions” from the poor or the oppressed. Stealing would be too much hard work; selling things people want to buy voluntarily is so much easier, and safer, than stealing.
Having billionaires succeed in America means their operational headquarters will be in America where they hire thousands of American citizens to sell and distribute their product. These people get paid by billionaires in salaries and health and retirement benefits which they use to live good lives, raise families and pay taxes on their income here in America, not elsewhere.
Mr. Sanders and Elizabeth Warren have the childish notion that rich people are taking the very food out of the mouths of poor people to stay rich as if we are living in some Dickens novel. Worse, they think that Robin Hood and Santa Claus are role models for federal budgeting and tax policy.
A billionaire cannot possibly consume $1 billion worth of food, clothing, cars or any other material good any human could possibly want in a year, a decade or a lifetime. One billion dollars would buy 333 million $3 burgers, to give one absurd example.
What do billionaires do with their money above meeting their basic human needs?
After paying their employees, they “pay” the rest of us to provide things for them and the rest of the country and world.
They buy expensive mansions at resort areas from Florida to California. Each time they buy a new 50,000-square-foot mansion, they hire contractors who then hire hundreds of construction workers who put in gold-plated porcelain sinks and air-conditioned dog houses for their favorite beloved poodle.
They buy expensive cars and jets and pay expert mechanics to keep those finely tuned machines running. Not to mention the hundreds of people who are employed by the manufacturers that make the cars and jets in the first place.
Wealthy people help make other people wealthy through their investments in new companies. They invest in companies they think will be profitable one day, although there is never a guarantee of success. Win or lose in their investments, the billionaires’ money goes to pay thousands of people in the new companies to do their jobs which provide salaries, pensions and health care coverage to an entirely new set of people outside of their main line of business.
The “worst” thing they can do is put it in a savings or checking account at the local bank. Which winds up going to help a regular person get a mortgage to buy their house or a loan to start their business.
When they die, they set up charitable foundations that build hospitals, universities, medical centers or make grants to help people in need the world over.
Rich people take money from customers all over the world and then basically “give” it to the rest of us through the free market system.
Mr. Sanders and Ms. Warren want Americans to believe they are modern-day Robin Hoods who will steal from the rich to give to the poor.
Or Santa Claus who somehow brings free toys to everyone each Christmas.