The Coercive Power of Government 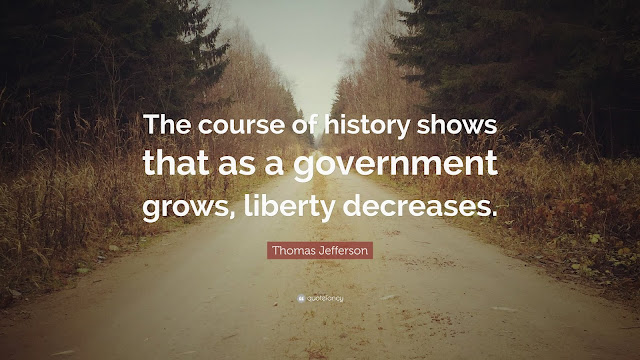 I had the chance to speak with a brash hot-shot young political operative from another Southern state who had helped a Democrat win a big campaign recently.

As Southern political types are wont to do, there was a lot of bragging and embellishment. Even young ones.

I asked 2 simple questions: 1) ‘Why are you a Democrat instead of a Republican?’ and 2) 'Do you believe in the coercive power of government?'

The bragging stopped. The answer was tepid and trailed off into platitudes and vapors.

The. Questions. Could. Not. Be. Answered.

Most people want to use the coercive power of government to tell people what to do ‘under penalty of the law’ if they think it has some beneficial ameliorative effect on American society.

However, the same people bristle at any effort by others from the opposite political belief who want to use the same coercive power of government to make them do something that impinges on what they perceive to be their God-given freedom to do.

No one really likes to have other people tell them what to do. Let’s all admit that much at least.

Here’s an easy question to start with to see how much ‘coercive power’ of the federal government you prefer: ‘Do you think rich people should be forced to pay more in taxes?’

Most people will reflexively say yes. They want the government to extract as much tax revenue from rich people and ‘big bad corporations’ as possible.

Mainly because that means they won’t be forced by the same government to pay more in their personal income taxes each year.

Should you be forced to pay more in taxes for the things you say you want the government to do for the poor, for the children, for our collective national defense?

Most people will say no to that question. ‘I am barely making ends meet as it is today!’ people will say especially if they have children who want to go to college and a wife who wants to take those same children on a vacation or two during the year.

How about using the coercive power of government to take away the 300 million+ guns that are in the hands of 50-80 million legal gun owners? Do you support that?

What if the other political side wins an election promising they will overturn every marijuana law on the books in the states that have approved its use and then authorizes the police force of the federal government to come into every home to take previously legal marijuana away from its owners?

How does that coercive use of government look to you now?

Generally, the laws that work for us as a free society are those that enable things to be done that benefit us all whether we acknowledge it or not. National defense and domestic security are two areas where the coercive power of government through taxation benefits us all.

A sound national and state transportation system is another. Building ‘post roads’ actually has the additional benefit of being in the Constitution so it is ‘constitutional’ as well.

Is ‘public education’ something that your children should be ‘coercively forced’ into attending without any choice at all? Or should you have the freedom to decide on your own to send your child to a charter, religious or private school with tax money you have already paid?

Our political differences are binary stars rotating around this question of the extent of how much coercive force of government each of us thinks Washington, our state capitals and local governments should have to govern our daily lives.

Maybe if we could find some common agreement on the limits of such power on which everyone could agree, that would be the start of finding compromises and solutions all of us could support on everything else.