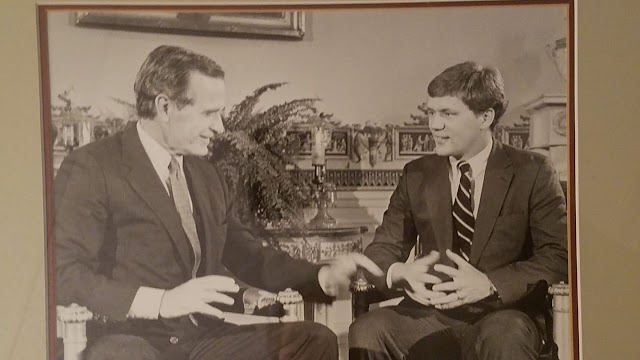 One of the coolest things about running for Congress even if you don't know what you are doing is you get to take pictures with the President of the United States and his Vice-President if they are of your same party.

In 1984, I was running for Congress from NC-2 so every Republican candidate from across the country went to Washington for some training and briefing on the issues.

Whether you had a chance of winning or not.

They line you up and then announce you as 'So-and-So from The Second Congressional District of North Carolina!' as if you are entering the king's court which you sorta are since it is the White House.

I first sat next to President Ronald Reagan who nodded his head as our picture was taken and said in exactly the same velvety voice you have heard a million times: 'Weeeelllll, Good Luck to You, Young Man!'.

I went around the corner where, about 30 seconds later, I found myself seated next to Vice President George H.W. Bush.

I told him I worked for a company called 'Zapata Ind....' before he cut me off with a laugh and said: 'That is a great company! Glad I started it!' thinking I was working for Zapata Offshore, an oil firm he started, not the bottling industry concern I was working for, Zapata Industries.

That is why he is seen in this picture slapping me on my knee.

Little did I know that I was getting photos of myself with 2 American Presidents in the span of 2 minutes since George H.W. Bush was the first sitting vice-president to directly succeed a president in the next election rather than by death or resignation since Martin van Buren succeeded President Andrew Jackson in 1836.

George H.W. Bush exemplified selfless ‘servant’-leadership at his very essence. He could have avoided service in World War II. He grew up in a family of privilege and pedigree in a patrician New England family.

He enrolled at age 18 to be the youngest aviator in the Navy.

For the same reasons, he ‘didn’t have to run’ for public office. But he did; he ran for the US Senate; served in Congress, was the Ambassador to China, was Ronald Reagan’s vice-president and then was elected President in 1988.

People say they want ‘compromise’ and ‘leadership’. They got both in President Bush 41.

At the 1988 GOP Convention in New Orleans, then-Vice President Bush said these unforgettable words: ‘Read My Lips. No New Taxes’.

In 1989, OMB director Richard Darman gave him the facts about the ‘alarming’ and ‘looming’ dangers of the then-unbelievable $152 billion deficits ‘for as far as the eye can see’. Our annual federal budgets were roughly $1.2 trillion and our national debt held by the public was the ‘unmanageable’ sum of $2.1 trillion.

We have $1 trillion annual budget deficits building on top of a $16 trillion national debt held by the public 30 years later. Both of which are glaring testaments to the collective failures by everyone who
has occupied the White House, Congress and the US Senate since 2001.

President Bush 41 signed the 1990 Budget Enforcement Act (BEA) when he knew it would hurt his chances for re-election in 1992 because it violated his 1988 campaign pledge. The BEA established spending control for the 1990s and laid the foundation for the 1997 Budget Act.

Voters voted President Bush out of the White House in 1992. But he did the right thing and he knew it.

I miss the statesmanship and guts of leaders like President George H.W. Bush.

Sad to see such leaders go.