Time To Be A Rational Optimist 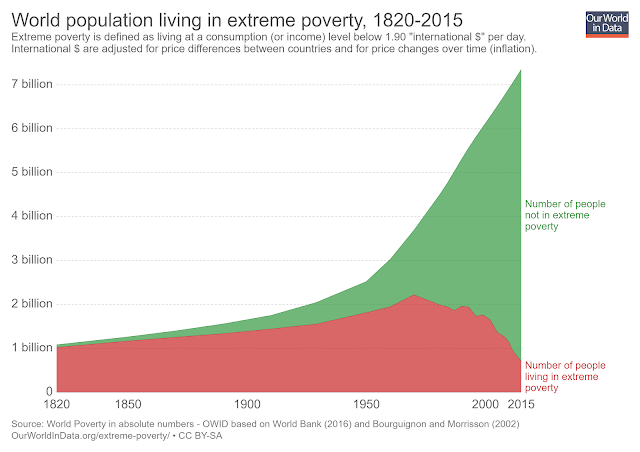 Isn’t everyone tired of all the negativity around the country?

It comes from all sides. Don’t kid yourself that it doesn’t.

Wouldn’t it be nice on this day after the 2018 elections if someone, anyone, everyone started talking about what is right with America and the world instead of blaming the ‘other side’ for everything wrong with both?

David Gardner, who founded the stock market advisory firm, The Motley Fool, with his brother not long after graduating from The University of North Carolina at Chapel Hill in 1988, gave a talk last week at the Wilberforce Conference sponsored by the North Carolina Study Center.

He spent a lot of time talking about a book, ‘The Rational Optimist: How Prosperity Evolves’ by Matt Ridley and how it influences his stock picking methods.

Ridley argues not from a philosophical or a political standpoint but from a science perspective that over the past 10,000 years, human beings have built not only wealth but trust across socio-economic and racial barriers by learning how to trade with each other.

As a result of trade and free enterprise, human development has accelerated at warp speed over the last 200 years. Mass epidemics have been wiped out or averted; 99% of the people on the planet today live in far better conditions than our Stone Age ancestors; global life expectancies have doubled since 1900 and billions of people worldwide have been lifted out of abject poverty once they have joined the international community of commerce and free enterprise.

These are all ‘great things’ everyone can and should celebrate together.

At a micro-level, two other things happened this past weekend which give at least older Boomers hope for the future from their Millennial offspring.

Our oldest son said he was working on a new board game because ‘people are tired of playing video games and being disengaged with each other. They want to interact more with their friends and neighbors and this new board game will help them do it’.

Our oldest nephew came to a birthday party for his 90-year old grandpa with short-cropped hair and announced he had gotten another raise at work and was now looking to buy an older used pickup truck simply because ‘it made more sense’ for him and his wife at this stage of his life.

He is now 35. Middle age in the strictest terms of life expectancy.

Despite all of our collective problems and doomsday predictions heard daily on cable tv and talk radio news marinated by vitriol and negativity by different political philosophies and worldviews, there is immense hope for the future regardless of what you hear daily.

Julian Robertson, founder of Tiger Management and benefactor of the prestigious Robertson Scholarship program at Duke and Carolina, closed a finals interview weekend with a very brief but on-target comment based on practical optimism: ‘There are people in this room tonight who are going to balance the federal budget; find a cure for cancer; and develop a solution to global warming. We hope you will come to Duke and Carolina to learn how to do it. Thank you and good night’

The driving force behind this rational optimism has to be a continued reliance on the freedom of people to think, innovate and act without outside constraints by governments often run by people who really do not know anything about technology, free enterprise or business in the first place. If we allow government to continue to expand their hegemony over millions of free people making mutually-agreed upon transactions daily, the rapid progression of conquering the world’s problems may slow to a crawl.

Buy ‘The Rational Optimist’ and read it this week. No matter what the outcome of any campaign was for you specifically, we all deserve a respite to dream big and hope massively for the future.