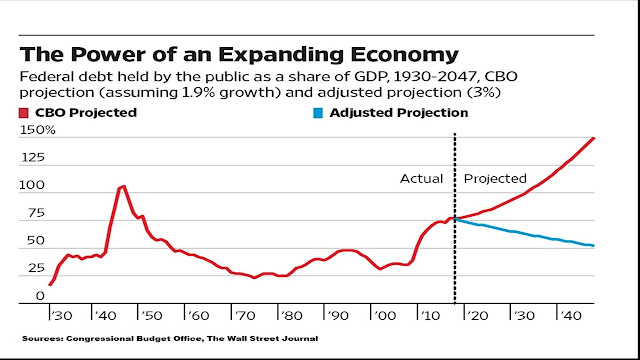 (first published in North State Journal 5/2/18)
If you are despondent about the state of modern American politics and the inability of both parties to engage in serious bipartisan efforts to balance our budget and start to dig out from underneath the Himalayan mountain of debt we are building, never fear:

There is a way to get out from under it all without Congress ever taking any congressional action whatsoever: return to historically average real economic growth of 3% per year in the United States for the next 30 years.

3% real economic growth is not far from our historical average of 3.5% real economic growth in the US since World War II. A combination of invention, patent and copyright protection, productivity gains and freedom has fueled the massive expansion of economic opportunity and advancement for millions of Americans since 1945.

If a switch could be turned on to spit out a guaranteed 3% rate of annual real economic growth in the economy, Congress could adjourn until the year 2047 and all of our economic and fiscal problems would be solved.

Including our exploding national debt.

Just let the economy grow at or above the 3% real rate of growth annually.

The Congressional Budget Office recently published their April update to the Budget and Economic Outlook from 2018-2028.

Federal debt held by the public is expected to reach 100% of GDP by 2028 under current assumptions.

‘Debt held by the public’ is the only debt CBO recognizes as being ‘economically significant’ since it has to be serviced by monthly interest payments to holders of debt instruments. CBO does not recognize intra-governmental debt as being economically significant, mostly in Social Security, since interest on such debt doesn’t get paid each month but is rather ‘imputed’ and will be paid later by higher taxes or reduced spending.

CBO forecasts a bump up in ‘real’ economic growth this year and next but sees growth falling long-term back to the 1.9% average annual growth rates we saw under President Obama.

Stephen Moore, an economist at the Heritage Foundation and advisor to the Trump Administration, says real GDP growth rates should far exceed 1.9% per year as long as Congress and Administrations do not throw a wet blanket on the economy with higher taxes and more regulations.

He used CBO data to show what average economic growth rates of 3% annually could do to our national debt over time. Debt held by the public could fall to a relatively ‘measly’ 50% of GDP in 2047 albeit at a level of about $32 trillion in an economy of $64 trillion.

Even if you don’t like President Trump or Republicans in general, you should be pulling for the recently passed tax cut package and the economy to work beyond everyone’s wildest dreams. For the next 30 years really.

Because there is only one other way to pay down national debt if Congress will not address the rise in the cost of entitlements or raise taxes to balance the budget:

For centuries, kings, dictators and republics have used inflation to pay down national debt with cheaper currency over very long periods of time. European countries have only recently paid off debts incurred from World War I with money that is not worth anywhere near what it was worth before The Great War.

Higher inflation hits the poor and elderly the hardest every time it happens.

Real economic growth over 3% per year for the next 3 decades might be the only way out of the long-term American debt trap. Especially if Congress does nothing to curtail entitlement spending.