The Scariest Budget Chart You Will Ever See 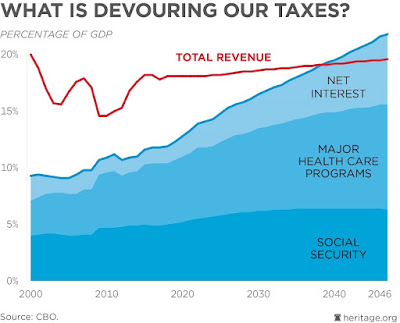 Every single tax dollar collected by the US federal government in 2039 will be used to pay for just 4 things in the budget:

Every dollar we spend on other federal programs will be borrowed from foreign governments such as China or Saudi Arabia; corporations and high net worth individuals.

That includes national defense, homeland security, environmental protection, welfare, subsidized housing, Pell grants and any other federal program you can think of or benefit from.

What does this ‘crowding out’ effect mean?

We can already see what it has done over the past 60 years. Non-entitlement discretionary funding, essentially the ‘guns-and-butter’ part of the budget, accounted for 68% of the 1962 federal budget.

Today, those same programs account for 32% of the budget. You can argue all you want about the need for more money to be dedicated to education, housing or welfare but the truth is, as a percentage of the federal budget, those programs have already been hit proportionally hard since 1980 by the slow but steady expansion of entitlement programs.

‘Why not raise taxes on the rich and corporations?’

‘Because it won’t work’ is the honest answer.

We have raised and lowered taxes on everyone and everything over the past 40 years. What has been the upshot of it all?

The American public has paid about 18% of GDP to Washington per year under all tax plans, regimes and disciplines. For whatever reason, either through aggressive tax-planning or deliberate underpayment of taxes, the American taxpayer has been remarkably consistent in paying taxes amounting to about 18% of GDP since 1970.

The only responsible way to run any budget for any government, corporation, organization or household is to control the rate of growth in spending or reduce it responsibly.

The sad, and odd, thing is that virtually all of our fiscal budget deficit and national debt issues today could have been avoided with a few legislative changes to both Medicare and Medicaid as far back as 1990. Had growth in both programs been held to the rate of inflation in the economy rather than allowed to grow at double or triple the rate of inflation annually since then, we would be talking about massive annual surpluses today and virtually zero national debt.

Annual tax cuts would have been the norm rather than the exception.

Social Security could have been reformed as well by changing the ‘bend point’ in calculation of benefits, which would have contributed to a further flattening out of federal spending as well.

Instead, after experiencing a too brief period of adult leadership and sensibility about the federal budget from 1997-2001 when 4 budgets produced surpluses instead of deficits, we now have to contend with the implications of dealing with rising interest rates on servicing national debt of $21 trillion and rising fast; critical national security concerns around the world, a burgeoning senior population due to millions of Boomers now retiring and a plethora of other public policy issues that have not been solved by either political party.

What can we do to solve our budget dilemma?

Congress can cut spending. Which it should.

Congress can try to raise taxes. But it won’t work as we have seen over the past 40 years.

The economy can expand at a 3% annual rate for 10 years instead of the desultory 1.9% average rate of growth under President Obama for 8 years.

Some believe we can grow at 4% per year or perhaps even 5% for some period of time.

If American economic growth out-runs our fiscal irresponsibility, it will be the greatest escape act since Harry Houdini.