The Federal Government Is a Huge Insurance Company With An Army

'Think of the federal government as a gigantic insurance company (with a sideline business in national defense and homeland security), which does its accounting on a cash basis, only counting premiums and payouts as they go in and out the door. An insurance company with cash accounting . . . is an accident waiting to happen.' -Former President George Bush 43 Treasury official, Peter Fisher, 2003

It has known in budget circles as 'The government is an insurance company with an army' statement. 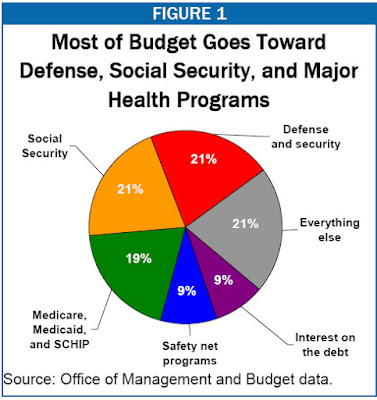 The US federal budget is now 50% consumed by spending for Social Security, a social insurance program; Medicare and Medicaid, two of the largest health insurance programs in the country; and various other social safety net programs which act as insurance plans as well.

Except for one thing. None of these federal insurance programs operate as licensed sanctioned insurance plans as we see in the private sector where money is collected from the individual and invested or managed in a fiduciary manner to build assets to pay for claims in the future.

Money that goes to pay for Social Security claims of current retirees today comes directly from the payroll taxes of current working Americans.

Money that goes to pay for Medicare claims of current retirees today is close to 90% paid for by payroll taxes and general fund tax revenues paid by current working Americans and active taxpayers. The only part of Medicare health insurance coverage that is paid for by the participants, aside from the deductible, is the 25% of the Part B premium that pays for doctor bills. Part A payments for hospital expenses are 100% paid by payroll taxes of working Americans today.

Money that goes to pay for Medicaid coverage for our least well-off fellow citizens is 100% paid for by taxpayers at the federal and state level, an average of 67/33 split overall.

Since tax revenues are fungible and wind up being used for any and all government expenditures in reality, roughly 12% of every dollar spent in the federal budget is borrowed which means future generations will have at least $22 trillion in national debt to deal with no matter what happens in the next 4 years.

Given the massive amount of debt that has to be serviced in interest each year which accounts for 9% of all spending in the federal budget, the federal government is the largest bond company in the world paying over $266 billion in net interest to holders of US debt worldwide in 2016 alone.

If truth is told about our federal government today, we have 'the largest insurance AND bond company in the world with an army'.

What does this mean to future generations of Americans?

Will they pay 100% of all of their income, payroll, excise, estate and corporate taxes to cover the social insurance programs plus interest in 15 years in 2032 to support their Boomer parents in retirement as currently projected?

Will they have to pay 25% more in taxes to maintain the status quo in federal social insurance programs?

What will happen to them if, and probably when, interest rates return to some sort of 'normal' range of 5% on federal bonds? That will mean they will have to pay $1 trillion per year in net interest alone to service the national debt which will further compress any and probably all discretionary domestic program from building roads to keeping our environment clean.

Our current national debate has been dominated by politically charged issues since the 2016 election. The big issue we have failed to elevate to a national discussion stage is how are we going to change our government spending so our future will be bright for our children and grandchildren.

It is a discussion we need to have.