One Small Step for Social Security

Did you pay $100 to watch the Mayweather-McGregor fight?

Such a small amount could be the key to saving Social Security for future generations.

A major obstacle to transitioning to any new Social Security system with even a smidgen of private investment for each person has been how to pay for it all without blowing the budget deficits through the roof.

Suppose you are 24 years old and invested the $100 you blew on the fight in a basic stock mutual fund. What would it be worth in 2067 if it appreciated at the historical average rate of return of 9.05% of the stock market for the past 150 years?

$7608.23. Inflation will account for 1/2 to 2/3rds of that amount but investing $100 for yourself for 50 years instead of giving it to 2 showboating boxers today means more money in your pocket, not theirs.

What if we had a provision in our current Social Security system that allowed for such a direct investment of $100 for every child born in America each year on the date of birth?

It is just math. 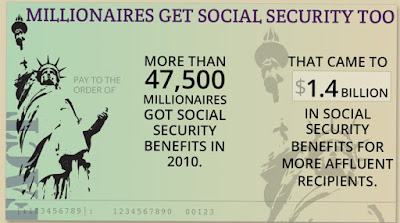 Set aside for the moment the question of whether a person should get everything out of Social Security they put in during their working career or whether it is a bonafide retirement plan to begin with.

It should be mighty tough for any political party or group to defend the 'constitutional right!' of billionaires such as Bill Gates and Warren Buffett to keep receiving $2700/month in SS benefits when they should not be on any federal transfer payment program in the first place.

Many very wealthy people stop paying into Social Security through payroll taxes when they start making most of their income from capital gains, dividends and interest from investments which are exempt from SS payroll taxes. Many are not paying into the system today as every wage-earner is obligated but they will receive virtually full benefits based on payroll taxes paid earlier in life.

If $1.4 billion in SS benefits was not paid to the wealthy retirees this year, 14 million children can have $100 deposited into their personal retirement accounts at birth. Roughly 4 million children are born in America each year. 3.5 years of annual births in America can be funded from one single year of suspension of benefits paid to the very wealthiest of citizens.

The budget deficits will not be increased. The national debt will not be increased. The money that would have gone to pay the benefits of very wealthy seniors who do not need federal help will have been spent to help transition a future generation from a defined benefit plan to a defined contribution plan much like the rest of corporate America has gone in the last 25 years.

Each child will have $66,684 in their own personal account at age 75 from that one single payment of $100 into a private account when they were born.

Imagine what the total would be if each person could invest substantial parts of all of their lifetime SS payroll tax payments in it as well.

The time for tired status quo talk about Social Security has expired. Budget reality and math has guaranteed as much.

Allowing small portions of Social Security payroll tax payments to be invested in personal defined contribution plans is the public policy equivalent of ‘one small step for man; one giant leap for American taxpayers’.