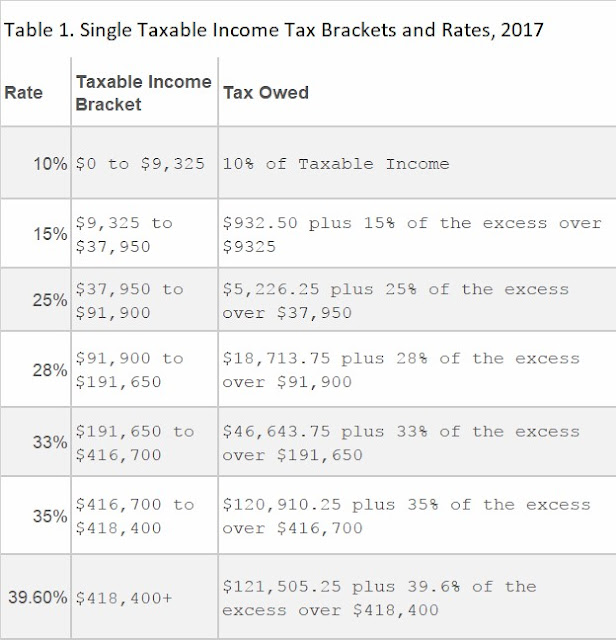 (first published in North State Journal 8/23/17)
There is nothing more disturbing in all of American politics than the misunderstanding and deliberate deception when it comes to the progressive income tax code of the United States.

People vote for pocketbook issues that are important to their family. Reforming and simplifying the tax code is about as important as it gets to the average American family every day, especially when compared to all of the obsessive media coverage about Russia since the election to name one example.

President Barack Obama said this about taxes in a September, 2011 speech on the economy:

Conflating 'taxes paid' and 'tax rates' is inherently a dishonest political way to confuse the voting public. In a world of reason, anyone who pays millions of dollars in taxes in cold hard cash is shouldering far more of a tax burden to support our government activities than an average person who might be paying a higher 'tax rate' at any level of income.

Take a look at the above chart and consider a secretary working for Mr. Buffett who makes $37,950 per year after all personal deductions are included on his or her tax form. They would owe $5226.25 in taxes for 2017.

See the difference? Very small amount in pennies paid but 10 percentage points higher than the 15% marginal tax rate paid on the amount between $9325 and $37,950 in taxable income.

Consider a very wealthy person such as Mr. Buffett coming along and filing his taxes behind the secretary at the local accountant office in Omaha, Nebraska. Many wealthy people make the vast majority of their income from appreciated long-term gains in their stock or real estate portfolios which are taxed at a 15% rate to recognize the long-term commitment it takes to make such growth happen in the first place.

Long-term asset appreciation is taxed at a lower rate since it is inherently risky to keep assets deployed in any long-term investment, many times which winds up being worthless and not taxable at all in which case the wealthy person loses all of his money AND the federal treasury gets nothing in taxes either.

Mr. Buffett makes $100 million in long-term capital gains profits from his investment and then pays 15% of that gain to the federal government and writes a check for $15 million to Uncle Sam.

'But he has paid a lower tax RATE than his secretary!' people on the left will scream.

So what? He has paid $15 MILLION in cold hard cash to the federal government whereas his secretary paid a total of 25 CENTS at the higher marginal tax rate. Which would you rather see if you want your government to continue to operate?

Hopefully as this troubled summer ends, we will see Congress start to address the whole issue of tax reform.  Don't get distracted by the 'fake news' difference between tax 'rates' and taxes actually 'paid'.

The battle cry of 'tax the rich more!' sounds good and resonates well in a speech designed to rouse the understandable human passions of fairness and equity. It fails as sound fiscal policy if it ignores basic arithmetic we all should have learned in elementary school.