'You Might Be A Small Government Conservative If You.... 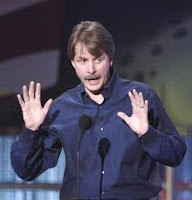 ...are for Raising the Ages of Eligibility for Medicare and Social Security!' as described in a recent CBO blog by the Director of the CBO.

We have always enjoyed the comedy of Jeff Foxworthy of 'You Might Be A Redneck' fame.  (You know who you are.  We went to school with you when you bragged about being a redneck!)

But what we are really having difficulty figuring out is who is really and truly for 'less government'.   The book would be pretty small if it was called 'You Might Be A Small Government Conservative If....'

Would it be the GOP?  'You might be a small government conservative if you cut spending and balanced the budgets every now and then!'

Raucous laughter in the audience.

Is it the Tea Party?  If so, perhaps they will adopt the age 70 retirement age as a solid plank in their platform going forward.  Has anyone seen any Tea Party advocate do this?  If so, please steer them our way.

Is it President Obama and the current Democratic Party?  (Sorry. In the interests of fairness we just had to ask full well knowing the answer is a resounding 'No!')

Raising the retirement ages almost immediately to 70 (the Early Retirement Age would have to be raised precipitously as well) would flush out the 'true conservatives' from all the pretenders it seems to us.

Reason #1 is the fact that 'true conservatives' supposedly don't want government programs and certainly not 'welfare'.  (SS and Medicare are not trust funds or any sort of 'actual' investments when funds are invested to grow and be taken out later for each individual)

Every SS $ received by you will be just a dollar taken out of your children's tax payment to Washington every other week; a dollar taken from another trillion or so borrowed from the Chinese in more debt or from money just 'made up out of thin air' by the Fed if the dollar is still in currency in 2025 or so.

#2 is the fact that 'true conservatives' want smaller government and balanced budgets. Right?  Is that still correct?  We are asking.

Raising the retirement age is a triple, if not a home run, for 'true conservatives' then!

Raise your hand if you are willing to adopt that as a critical plank in the new political majority that is budding out there.

Implementing the higher age thresholds for both Medicare and Social Security on a phased-in basis will solve close to a minimum of 16% of the long-term budget deficit problem just by doing those two things alone by 2035. Accelerating the hike to age 70 in both Medicare and SS in the next 10 years may solve close to 50% of our structural deficit problems.

People will say: 'You can't make everyone wait til 70 to retire!'

Ok, you are right.  Offer exemptions due to physical and mental health conditions. You are most likely going to have to work to age 70 anyway due to the financial losses incurred over the past 4 years in your retirement plans.

Honestly, who in the later Baby Boom Generation and younger has ever really believed Social Security was going to be there for them anyway when they retired?  Many people have long planned for zero Social Security benefits in retirement.

Take a look at what the CBO Director has to say about this important issue.  We have reprinted it below to make it extremely easy for you to read and not ignore.  It is a big deal.

'Raising the ages at which people can begin to collect Medicare and Social Security benefits would be one way to lower federal outlays, raise revenues, and reduce long-term fiscal imbalances. A CBO issue brief released today reviews how ages of eligibility affect beneficiaries under current law and how delaying eligibility would affect beneficiaries, the federal budget, and the economy. (CBO has explored this issue in other publications, most recently in March 2011 in Reducing the Deficit: Spending and Revenue Options.)


Raising any of the ages of eligibility would cause some people to work longer, thereby increasing the size of the workforce and the economy. Although the magnitude of those effects is difficult to predict, CBO estimates that:


Raising Social Security’s early eligibility age to 64 or the full retirement age to 70 would, in the long term, boost the size of the workforce and the economy by slightly more than 1 percent.


Raising Medicare’s eligibility age to 67 would also boost the size of the workforce and the economy, but by a much smaller amount.


Medicare provides health insurance to almost everyone who is 65 or older. If the eligibility age was raised above 65, fewer people would be eligible for Medicare, and outlays for the program would decline relative to those projected under current law. CBO expects that most people affected by the change would obtain health insurance from other sources, primarily employers or other government programs, although some would have no health insurance. Federal spending on those other programs would increase, partially offsetting the Medicare savings. Many of the people who would otherwise have enrolled in Medicare would face higher premiums for health insurance, higher out-of-pocket costs for health care, or both.


CBO estimates that raising the MEA would reduce Medicare outlays, net of premiums and other offsetting receipts, by $148 billion from 2012 through 2021. By 2035, Medicare’s net spending would be about 5 percent below what it otherwise would be—4.7 percent of GDP rather than 5.0 percent under current law. A rise in the MEA would cut by a larger percentage the number of years during which the average person would receive Medicare benefits, but the percentage reduction in outlays would be smaller because the people affected would be the youngest beneficiaries, who tend to be the healthiest and thus to require the least costly health care.


The FRA under Social Security—the age at which participants are eligible to receive full benefits—is currently 66 but is scheduled to increase to 67 for people who were born after 1959. Beneficiaries may choose to begin collecting benefits before the FRA, but then they receive less per month. Therefore, raising the FRA would result in a reduction in lifetime benefits relative to what people would receive otherwise.


On average, raising the FRA would induce people to work longer to offset the lost income. Moreover, the amount of additional work would probably be greater than would occur if an equivalent benefit reduction was implemented without changing the FRA because more people would be inclined to claim benefits later.


The reduction in monthly benefits for some beneficiaries would lower average income and increase poverty rates in the future among the elderly. The increase in the FRA would be particularly burdensome for people with low income, who tend to rely heavily on Social Security benefits, and especially for those who could neither qualify for Social Security Disability Insurance nor adjust their work patterns.


CBO has estimated the effects of one option for gradually increasing the FRA to age 70 by two months per year. The result would be to shrink federal outlays by $120 billion through 2021. By 2035, the option would reduce Social Security outlays by about 4 percent relative to what would occur under current law. The effect of the changes would continue to grow; by 2060, outlays would be reduced by about 13 percent.


Currently, more than half of nondisabled beneficiaries who receive Social Security benefits based on their own work history claim benefits at 62, and almost 60 percent claim before 64. Therefore, if the EEA for Social Security was increased from age 62 to age 64, many people would be forced to claim benefits later than they otherwise would. They would receive larger benefits each month for fewer months overall, but currently those factors would approximately balance and an average beneficiary would receive roughly the same total benefits over a lifetime.


Federal outlays would decline in the short term—by $144 billion through 2021, slightly more than 1 percent of projected Social Security spending—because people would have to wait until they were older to apply for Social Security benefits. Outlays would continue to be slightly lower than under current law until about 2035 and would be slightly higher thereafter, as higher subsequent monthly benefits would offset an increasing share of the savings from delayed eligibility.


Effects on Labor Supply and the Economy


Because the experience of changes in the eligibility ages is limited, CBO’s estimates of the effects of such changes on work decisions are highly uncertain. CBO estimates that increasing the EEA by two years would induce people who would have claimed benefits at age 62 or 63 to work an additional 11 months, on average. Once the new EEA or FRA applied to all people close to retirement, the policy change would increase the size of the labor force by slightly more than 1 percent and increase GDP by slightly more than 1 percent. Raising the MEA to 67 would result in an additional month of work per worker, on average, and would increase the size of the labor force and GDP by about 0.1 percent.

In the absence of evidence on how to project behavioral responses to simultaneous increases in all three eligibility ages, CBO assumes that the effects of simultaneous increases in the eligibility ages would equal the sum of the effects of increasing each age separately. CBO estimates that by 2035, the set of increases just described would cause outlays for Social Security and Medicare to fall by 0.4 percent of GDP and federal revenues to rise by around a half percent of GDP—leading to a reduction in the budget deficit of nearly 1 percent of GDP, not including the effects of lower interest outlays. Altogether, by 2060, the federal budget deficit would be reduced by about 1¾ percent of GDP.'
Posted by Frank Hill at 4:43 PM