Why Are There No 'True' Hamiltonian/Federalists Any Longer? 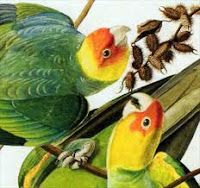 We had such fun and a good response with our last posting about what a 'true' conservative is nowadays that we thought we would try to figure out what a true 'Hamiltonian Federalist Concentrated Government Power' advocate would be like in the 21st century.

We hasten to guess they would be as rare to find as a 'true conservative' along the Jeffersonian-Madisonian lines we discussed previously.

Both species have become virtually extinct just like the dodo birds, the carrier pigeon and the Carolina parakeet (which was beautiful by the way).  It is like the DNA of both has been lost in the wild somehow, the Hamiltonian Federalist chromosomes lost to the modern-day Democratic Party and the Jeffersonian/Madisonian chromosomes to the Republican Party.

First of all, Alexander Hamilton probably could not process in his mind the extent to which his goal of concentrated government power has become in modern-day 21st century America.

Any of these Founders might come back from the Great Beyond and just shake their head and say: 'Is this what has happened to our American Republic that we founded on the bedrock principles of liberty and freedom 223 years ago?'

Let's take a look at a few of Mr. Hamilton's words regarding debt and government:*

Apparently, even though Mr. Hamilton wanted the federal government to pay off all the debts incurred to win the Revolution, he also thought that any debt assumed should also have a set schedule under which it would be paid off with revenues collected by the government.  In 1789, that would have been predominately the imposition of import taxes on all products shipped into the new United States of America.

He would have a field day today trying to figure out how we are going to pay off this massive $10 trillion of 'real' debt now owed to private investors and foreign sovereign nations who now own this debt. (the intragovernmental debt allegedly 'owed' to the Social Security Trust is ephemeral and chimerical. The CBO has determined that such 'trust fund debt' has no intrinsic value and is merely an accounting entry on paper alone that serves to highlight just how much financial malfeasance has actually gone on in Washington over the years)

Let's see...if we just took every single dollar of current federal income, corporate, payroll, excise and estate taxes to the tune of about $2.4 trillion that comes into the federal treasury each year, it would 'only' take 4 years to pay off this 'real' debt. Mr. Hamilton's keen sense of debt retirement would be pleased.

But we would not be able to pay one thin dime for anything else. Defense, education, homeland security, nothing. Without starting all over again and borrowing it all from the Chinese, the Saudis and anyone else crazy enough to keep lending to us.

Mr. Hamilton probably would agree with a move back towards replacing the cumbersome corporate and individual tax system with a consumption tax.  After all, the Founders could have made income taxes the very fount of the revenue stream for the new Republic way back in 1789...but they didn't.  They had just fought a war against capricious taxation without representation under King George III and they sure as heck didn't want to give the new Congress the ability to tax income which always leads to class warfare and more factionalism.
Now all we have is 'taxation with representation'!
But Mr. Hamilton certainly understood that a consumption tax would proscribe the amount of taxes that could be collected and hence, the size of the government that could or should be funded. We really should be funding a government that is paid for by current revenues collected and not passing on the costs, both explicit and implicit, in the debt we are accumulating to our children and grandchildren.

It is just plain immoral and blatantly unfair to them.

Mr. Hamilton, of all people, understood that perhaps the only time to borrow massive amounts of money was when the nation was at war.  Certainly not when we have been at relative peace for the past 60 years relative to the Revolution, the Civil War, WWI and certainly WWII, the granddaddy of all world wars in history.
Mr. Hamilton would recoil at the current antics of everyone in Washington today from President Obama to Members of the House and Senate from both political parties where neither side can come to any suitable compromise on anything.  He would recoil in shock and horror just like Mr. Jefferson and Mr. Madison would as well.
They all realized, along with the other Founders that the foundation of our democratic republic was the ability to think together, reason together and then 'compromise' or cut a deal for the good of the nation, not to save their political lives or careers. They would either 'hang together or assuredly we shall all hang separately' as Benjamin Franklin intoned at the signing of the Declaration of Independence in 1776 which certainly forced a great deal of compromising among themselves in order to survive those early days fighting together.
Our conclusion, based on this posting and the previous one on Jeffersonian/Madisonian limited government, is that there are virtually no Hamiltonian Federalists left in our society just like there are hardly any true Jeffersonian/Madisonian 'small government' people left around either.
Hamiltonian Federalists would at least have the guts to raise the taxes needed to pay for any new debt incurred by the federal government and not rely on ever-increasing amounts of debt to pay off old debt and never retire it ever.  They would also recognize that taxes should be broad-based (consumption tax) because if everyone does not have to bear a share of the burden, they will never fully care about or appreciate the cost of providing for things such as our collective national defense, maintenance of the interstate road system or a common shared public education system.
In short, both Hamiltonian Federalists and Jeffersonian/Madisonian Democratic Republicans would realize that balancing the budget is paramount; debt should be paid off by the same generation that incurs it and extended periods of excessive debt and ever-escalating interest payments can have long-term deleterious effects on the soundness of the currency and economic health of our nation.
All the things that modern-day Democrats and Republicans have failed to do or even fully understand and appreciate.

So maybe all the officially registered Independents and Unaffiliateds are looking for a new political party banner to unite under.

How about the 'Federalist Democratic Republican Party' for a start?
*From David Frum's 'Frum Forum' post by Ben Silber on April 19, 2011.
Posted by Frank Hill at 4:29 PM