What Do James Madison's Views On Constitutional 'Checks and Balances' Have To Do With The South Carolina Primary Today? 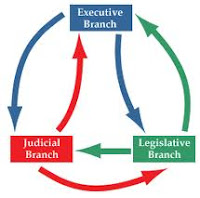 Here's the quaint little diagram most textbooks have taught American schoolchildren over the last century about the so-called 'checks and balances' in the American democratic republic system.

Looks simple, right? It almost looks like a 'peace-and-love' symbol from the early 1970's.

It is also vastly 'wrong' when considering just exactly what sort of government James Madison and his good friend, Thomas Jefferson, were trying to establish in 1787, even though Mr. Jefferson was in Paris, France busy trying to establish trade treaties and beg for money to help pay the debts of the newly-minted young American Republic.

France and Holland were the Chinese money-lenders of the time. America hasn't learned much about borrowing in 223 years, have we?

Here's why these simplified school charts are so 'wrong': James Madison, Thomas Jefferson and even Alexander Hamilton for the most part had zero intention of creating any system where the legislative branch did not reign supreme.  As in having every single last card to play whenever it came to making public policy changes in America.

A better way to consider what our Founders really wanted in the new democratic republic would be to consider the words to one of The Rolling Stones' greatest hits, 'Under My Thumb' in 1966 and think of them in terms of what the Founders were trying to do back then:

'The squirmin' dog who's just had her day...The way she does just what she's told. Down to me, the change has come. She's under my thumb.'

The 'squirming dog' back then was the King of England who had just lost his total monarchical power over the former colonies. For good reason. He was too oppressive, too capricious and too over-bearing in his demands of the American taxpayers.

Who would be the 'squirming dog' today in modern-day America should Messrs. Madison and Jefferson come back from the dead to lead us again? Or better yet, some modern-day Madisons and Jeffersons with a pretty solid understanding of their constitutional genius and ability to lead our nation again?

The omnipotent and over-reaching President of the United States and the Executive Branch of our government. All of which have been fed and fueled by the sometimes coherent (but mostly not) decisions of our elective representatives for the past 80 years but for the most part, the past 20 and certainly the past 10 years with almost a childlike reckless abandon.

This is not a direct slam at President Barack Obama, although we believe he has taken the control of the executive branch and taken it to the extreme in off-the-constitutional-backroad-driving contest.  This is a direct slam at the proclivity of the once-free nation of the United States of America that seemingly has defaulted its right to be a self-governing nation where 50%+1 of their number in Congress got to choose how we were run as a nation.  Not the President and his minions.

Take a look at this 'revised' chart of Constitutional checks-and-balances that we think more realistically reflects the intent of the framers of the Constitution in 1787: (You may have to click on the chart to open it in a more clear and easier to read new window) 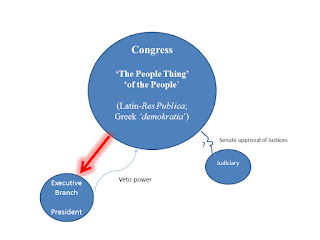 We think Mr. Madison and the other Founders 'stacked the deck', deservedly so, in Philadelphia in 1787 so that Congress, not the President, and certainly not the Supreme Court, would be the ultimate arbiter in all things relating to the conduct of the affairs of this nation.

Sure, they wanted a 'single voice' to speak for the nation when it came to foreign affairs and being the Commander-in-Chief of our armed forces.  But they also reserved the right to 'declare' war to Congress so that we didn't have some modern-day Alexander The Great gallivanting all over the globe extending his imperialistic dreams everywhere with the blood of American citizen-soldiers instead of just focusing on defending our borders and interests around the world when necessary. (as in World War II as a prime example)

The 1787 Constitutional Convention was so vague about the scope and range of the Supreme Court and the judicial branch that the words 'judicial review' never even show up in the vaunted language of the US Constitution.

The power to overrule another branch of government did not occur for the Supreme Court until the 1803 Marbury vs. Madison ruling, 14 years after the founding of the Republic. And in another strange twist, President Jefferson sent a budget to the US Congress asking for $0 to fund the entire judicial branch around about the same time 'because the courts had gotten too political'.

Why does any of this matter today, of all days?

The South Carolina primary takes place today and with it goes the next step in determining who the nominee will be for the Republicans to challenge the incumbency of President Barack Obama who wants to serve another 4 years as our Chief Executive of this great nation of ours.

With the fall presidential elections coming up, we also get one more quadrennial chance to decide what sort of Republic we want to have:  Do we want to continue building an ever-expanding and expansive government built on executive privilege and prerogative?

Or do we really and truly want to progress to a day when a normally-functioning, sentient and coherent Congress will meet to discuss our problems in a sane and rational manner and actually come to some reasoned conclusions based on compromise where at least 50%+1 of the Members of Congress and Senate vote 'Aye' to save the Republic?

You know, like the Founders really wanted us to do.  Forever.
Posted by Frank Hill at 5:50 AM