Mark Twain gets attributed this great quote although he tried to say he got it from Benjamin Disraeli, the great British Prime Minister and statesman of the middle 19th century.

But no one can find that quote for sure in any of Disraeli's writings so so much for attribution and and chalk up another one for literacy license.

Heading into a new year is always a good time to reset your attitudes and perspectives on life so we thought we would try to reset our brain and yours on the harsh budget realities that now face us in America.

We have always tried to provide you with the hardcore, base, raw data and information you need to know about directly from the readily-available-but-never-read-or-published-without-distortion from resources such as the CBO or OMB or any one of the hundreds of other budget related blogs or archives we have brought to your attention over this time.

We hope it has been helpful and informative and at times, perhaps even a bit interesting and amusing.

We are actually more optimistic now than at any time since 2007 for many reasons, most of which is the upsurge in the number of good people we know who are running for public office or planning to do so in a very short time.  That is the only way our democratically-elected republic is going to 'cleanse' itself: by replacing virtually every single incumbent now in public office across this great land with men and women of higher intelligence, experience and reasoning capacity.

You know, like the Founders Jefferson, Madison, Adams, Washington, Franklin and the others who sacrificed so much to give us a chance to live in the greatest and most free nation ever.

So here's some more information to throw into your brain this morning and let ferment some, just to get your mind around the immense scope of not only our federal government's size but the dynamism of the American economy that when unleashed, can help solve a lot of ills that currently infect us:

Take a look at this startling CBO projection as of FY 2005, as in January, 2005 when they do these types of things in Washington. (You may have to click directly on the chart below to get a more easily-readable, clear image to study to your heart's content) 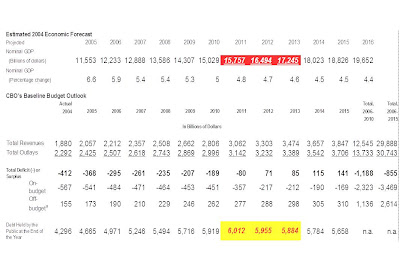 That is not ideal and reflects a 14% hike over projections from 7 years ago.  It is still 'way too high' for the very few true Jeffersonian/Madisonian small government conservatives that still exist in this nation (they are far fewer than you really think)...but it is not apocalyptical in and of itself.

The difference between the income coming in from federal tax revenues and the spending outlays that go out every day, week, month and year CAN become apocalyptical if we don't rebalance the two very soon. The 2005 projections expected us to be in a $71 Billion SURPLUS!! by 2012 and start paying down our enormous projected debt then of $6.012 trillion in debt held by the public (not the $10+ Trillion and rapidly growing debt that now actually exists)

See? We just can not be completely Pollyanna-ish running around with rose-colored glasses with Dr. Pangloss, now can we?

You will also see that the CBO 2005 projections of current nominal GDP in 2012 would be about $17.250 Trillion. It is now hovering just around $15 trillion and still holding where it has been for the past 3 years now and running.

So despite ALL the handwringing about the wars in Iraq and Afghanistan AND the W Tax Cuts AND the entitlement spending that is out-of-hand (which is still true!)....given any normal sense of economic health over the past 5 years that would have us anywhere near the projected $17.25 Trillion hoped for and expected in 2005, we would would be in pretty darned decent shape.

Even at Obama-inflated levels of government spending, the level of guvmint spending to a GDP of $17.25T would be 'only' 20.8%. Most Republicans and fiscal conservatives would gator in the streets as long as they thought federal government spending was heading anywhere near the historical average of 18.5% of GDP.

At the 2005 projected level of spending of $3.3 trillion in 2012 in an economy at $17.25 trillion in size, the level of federal guvmint spending would be 'only' 19.1% or something like that which even a hardcore troglodyte small government conservative could swallow...for a little while at least.

The bottom-line in this little saga?  The complete corporate and financial malfeasance and wreckage brought upon by the gross negligence of our leaders on Wall Street; in the banking and financial services system; in the speculative real estate markets in mostly Florida, California and Las Vegas and fueled by lax oversight by those who have served in Congress over the past ten years has led not only to a federal fiscal budget disaster of biblical proportions but it has also led to a shaving off potential GDP in America by over 13%.

That is over $2.25 trillion in lost economic capacity which translates directly into millions of lost jobs, destroyed plants and equipment, empty homes and commercial real estate and diminution of retirement plans and 401k plans.

L'il Abner will make more economic and fiscal budget sense than they will.
Posted by Frank Hill at 12:05 PM