'So, Mr. Lincoln, Will You Show Us Your Tax Returns And Did You Ever Sleep With Barnyard Animals'? 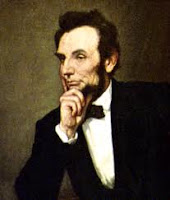 'Umm, the primary issue in this campaign of 1860 is whether the Union will survive or not, Brian with all due respect.'

Don't you just wish the media would actually ask questions of these presidential candidates that are important to us as a nation?

Honestly, what net effect does the release of Mitt Romney's tax returns for the past decade have on whether you will ever get a job again or your business will succeed?

And, (pardon the French), who the hell really cares whether Newt Gingrich ever 'consulted' or 'lobbied' for Freddie Mac?  (Answer:  Companies don't hire people with legislative experience to teach them history about the Crimean War or the impact of the Whiskey Rebellion on the young United States.)

We have much bigger problems than either of those two questions, Brian Williams and John King, with all due respect.

We decided to go back in the Wayback Machine to see just how ridiculous most of modern-day journalism has gotten with these seemingly interminable debates, especially when we are confronted with the greatest economic challenges since: 1) The Great Depression and 2) any of the economic depressions that followed the Civil War, in that order.

John King, American Telegraph: 'Mr. Lincoln, did you actually get paid by Illinois Central Railroad for the legal work you did for them when they were becoming a big bad giant railroad company?'

Brian Williams, News Courier Services: 'Mr. Lincoln, is it true that you have actually slept in the same bed with other men during your travels about the Midwest?

Lincoln: 'Mr. Williams, there are many times when there is only one straw bed in the hotel and 5 men will sleep in the same bed after a long journey on horseback.  It is 1860, you ninny!  Now can we get back to what the real problems are in this country, namely keeping this Union together and what to do about the issue of slavery and state's rights?

Now, of course, the press was just as mean and insolent back in antebellum days as they are today in 21st century America.  Abraham Lincoln was routinely called a 'baboon' and a big dumb backwoodsman from Illinois by his opponents and columnists alike.

But don't you wish that for just once, we could have a debate with these following questions, mainly because they get at the root of what our problems are as a nation today?


(We threw that last one in to see if you were paying attention.  We wonder sometimes if all intelligent life has not just vanished from the modern media and modern political scene, though)
Let's hope future reporters will actually get their heads screwed on straight before asking any more questions to these candidates, one of whom will be trying to unseat President Barack Obama in November.
The list of questions we want answered are above and very simple to ask.  Send them along to John King and Brian Williams, et. al. if you know them.  They will be doing the American Republic a great favor if they will focus on questions that actually mean something to our future.
Posted by Frank Hill at 3:11 AM