Is It The ‘Laffer Curve’ or the ‘Laugher Curve’? 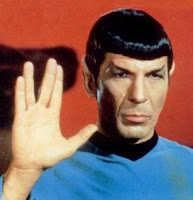 We think it is neither.  Which we will explain later.

A friend of ours who is a professor of health care economics at the Terry Sanford School for Public Policy at Duke University (they do more there than just win basketball and lacrosse championships, you know) sent this link to us from the Washington Post.

We are not exactly sure what the first economist from Berkeley is talking about in his answer to Mr. Dylan Matthews in the Post article but we did see the figure '73%'...and thought he might as well have been speaking Klingon. Cause we know that 73% just ain't 'the right answer'!

There is this popular notion that lawmakers in Washington somehow are omniscient enough to 'know' what the 'correct' or 'optimal' tax rate is for everyone else to be paying.

How do they know that?  Did Moses hand it off to them on the flip side of the Ten Commandments etched in stone or something?

Does anyone really believe that any elected official in the US Congress has the capacity to pick out the one magical marginal and optimal tax rate based on any decision made up there in the past decade?

Here's what we think is the 'bend point' for the marginal tax rates:  It is whatever 'point' truly wealthy people decide it is for them...and them alone!

Wealthy people can afford the best tax lawyers and accountants in the universe. If they hate government and don't wanna send any of their hard-earned money to Washington, they usually don't and they can do it in legal ways unimaginable to the average person. And they turn the Laffer Curve into the 'Laugher Curve', at least for them.

Ever wonder why Warren Buffett makes a big deal out of taking 'only' a $100,000 salary every year?

Or wealthy people use the basic ‘Marginal Cost > Marginal Benefit’ argument to pay more taxes when the cost and the headache of tax avoidance is more than the amount they owe so they just stroke a check, send it to Washington and are done with it.

We have run into a few mega-wealthy people, believe it or not, over 22 years in Washington, DC and 2 of them have told me 2 very different things when it comes to how they view new tax bills that will raise their taxes:

1) The first guy, let’s call him ‘Mr. Midas’, told me he sits down with his army of accountants and lawyers (he has 'hundreds' in his employ...seriously!) at the end of each fiscal year to plan for the next. He asks them what it will take to get his 'effective tax rate' down to around 19%. He doesn’t care about ‘marginal’ tax rates at all when it comes to his own personal situation.

‘Effective tax rate’ is what percentage of your earned income you send to Washington at the end of all the calculations. ‘Marginal tax rate’ is the rate you pay on the 'next dollar earned' above a certain threshold set by Congress. Most of the news and cable-jabber focuses on the ‘marginal’ tax rate but the key point for each individual is how much you send total during the year, regardless of what the next rate threshold is.

His rationale? He believes 19% is the 'optimal' level for federal spending as a percent of GDP and he is 'willing' to part with the same percentage of his income to pay for it. No more, no less.

And then he does it....each and every year.

2) The second man, call him ‘Mr. Croesus’ told me: "I am the luckiest SOB on the face of this planet (actually one of the total of 403 "lucky' but hard-working, smart billionaires in the US today). I just pay whatever Washington tells me to pay because I got rich in the best country in the world!"

I told him he was a sheer lunatic and might as well be howling at the moon. I offered to send him a copy of the federal budget, all 2400+ pages of it with 2400 Post-It notes attached to every page to show him where at least 50% of what he sends to Washington each year is wasted.

He gracefully declined and sighed: "I would really rather not know!'

He is truly insane. But he did sleep at a Holiday Inn last night so we guess he really does know what he is doing.

But in our humble opinion, there is no single 'bend point' when it comes to generating the optimal amount of tax revenue with tax policy for anyone making over $500k in annual income or have a net worth of, let's say, over $5 million.  To assert that there is some sort of 'magical' marginal tax rate that gleans every available dollar out of people's pockets to be paid in taxes to Washington strikes us as being more than a little bit ridiculous to be honest about it.

The truly wealthy make their own decisions on what they are willing to pay in taxes to Washington. The rest of us have darn little choice but to have it withheld from our paychecks or make quarterly payments and hope for the best.

Like 'hope for' the days when we will have some adults elected to Congress to reduce spending, balance these horrific budgets and then reduce our taxes as they reduce spending every year for the rest of our lives.

That is what it is gonna take, people. Spending is something Congress can control down to the penny each year and we have to elect people who will vote to hold down the rate of growth in federal spending to below 3% annually for the rest of our lives.

Congress can not control the 'optimal' amount of tax money that will be sent to the US Treasury every year any more than Captain Kirk could control the Klingons, Romulans or even the Vulcans.