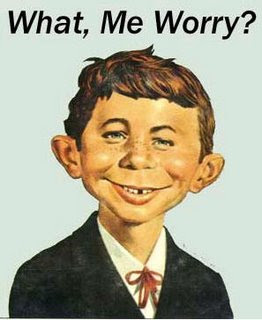 With all the hubbub about the recently-passed health care reform (sic?) bill, we thought we would step back and take a look at this thing through the eyes of  Professor Alfred E.Newman, he of irreverent MAD Magazine fame, who is apparently leading the "Don't Worry, Be Happy!' political party in the 21st century.

“What is the big deal?’ Mr. Newman might say. “All we did was expand health care to everyone and besides, who cares just how large our budget deficits and national debt get as long as everyone is taken care of now with universal health care coverage?”

One young national opiner, a Mr. Ezra Klein, even went so far as to officially say that this is not a big deal because it ‘only’ raises spending by 4% of all health care spending in the out-years. (We don't think he ever served on a budget committee of any kind in the U.S. Congress from what we can tell)

Our retort is this: Is that 4% going to be too much when piled on top what will be by then well over 50% of our entire federal budget outlays in spending going to Medicare Parts A, B and D and Medicaid? People like Mr. Klein and Mr. Newman never seem to be concerned one whit about how we are going to pay for all of this stuff and ever balance the federal budget again in our lifetimes.

What could possibly happen as a result of this bill?

Nothing, other than millions of people will have access to health care coverage which is a good thing.  We all want that; we just have differing views on how best to achieve that laudable goal, except many Americans want it done within some firm budgetary limits.

Who knows?  This thing might actually work out exactly like the geniuses who designed it say it will.  There will be absolutely zero unintended and deleterious side effects, ever.  President Obama and Speaker Pelosi 'promised' us that, didn't they?

The United States economy is so enormous and vibrant that it has withstood such tectonic shocks as the inane political decisions that lead to the Great Recession that Became the Great Depression during the 1930’s and 'only' took 10 years of  'government infrastructure economic stimulus' to get out of. (sound familiar?)

We have been running what has seemed like treacherous deficits and building up magnificent amounts of debt since 1970 (for the only extended period during peace conditions in American history except for the Great Depression) and nothing really and truly 'awful' has happened as a result. ‘So who should really care?’ say many from the Progressive Alfred E. Newman Party.

We could skate by any possible problems caused by the expansion of debt now under the Bush and Obama Administrations. Just like always in the past.  “We are America! We are not bound by the usual rules of gravity, economics or common sense!’

Or we may not. What then?

Many economists have estimated that future economic growth will drop by 1% per year when national debt exceeds 90% of GDP. Check out Japan for the past 20 years. Remember when everyone was worried Japan was going to take over the economic world and buy up all the US commercial real estate? Their debt-to-GDP ratio is now 192% and they have been in the La Brea tar pits of economic stagnation ever since 1989.

This could happen because of the effects of higher interest rates when foreign creditors start demanding higher rates of return on their US bond holdings when ratings agencies such as Moody’s lower their U.S. bond ratings (Moody's completely missed the ball on the US mortgage and derivative implosion, so why should anyone trust them anymore either to get it right?)

Or it could be the sheer amount of interest payments that have to be made on the debt. That is taxpayer money that could stay in your pocket to invest; start a business; pay for an addition to your house but instead, is being sent overseas so they can decide what to do with your money instead of you.

We are paying $250 billion per year in interest payments right now in cold hard cash to holders of US debt with about $50 billion of it going to the Chinese. Even under optimistic scenarios, that number will rise to close to $800 billion per year by the end of this decade when higher ‘more normal’ interest rates return AND the amount of our collective national debt is more like $20 trillion instead of $13 trillion today.

And what happens when we find ourselves borrowing more money from the Chinese to pay for the interest payments we are now making to foreign creditors….like the Chinese? Talk about a dog chasing its tail….

All of this could happen….or it might not happen at all. We are of the mind that while anything is possible, why take unnecessary risks when you really don’t have to?

Ronald Reagan once was asked why he took naps in the White House in the afternoon (after all, he was almost 70 when he took office) and got a reputation for maybe not working hard every single moment of every single day.  He replied in his best actor-voice: “Well, I have heard it said that hard work never killed anyone…but I figured: “Why take the chance?”

We agree: Why take the chance that this enormous explosive debt could turn into an unmanageable firestorm and lower the future economic prospects of our children and grandchildren? How selfish of our generation is that?

Maybe we should just join the Alfred E. Newman Party like so many of our friends on the ‘Don’t Worry; Be Happy!” side of life…..why not? They seem to be having a lot more fun spending all of our federal taxpayer money nowadays, don’t they?

courtesy of www.economicsociology.wordpress.com
Posted by Frank Hill at 9:11 AM