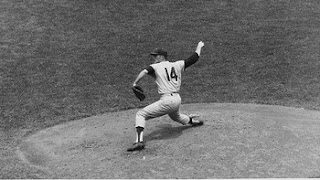 Amidst all the hubbub about Senator Jim Bunning holding up the unemployment extension bill last week was one ‘inconvenient truth’ the news media always failed to point out when they were throwing beanballs to his head just like, well...just like the All-Star Phillies pitcher, Jim Bunning did to any opposing batter who was crowding 'his' plate: (he did pitch 2 no-hitters, 1 of them a perfect game, and hit 160 other players with 'beanballs' or pitches he threw to their body or head)


He was only trying to help President Obama, Speaker Pelosi and Majority Leader (for now at least) Reid be men and a woman of their word and honor.

On February 12, barely a month ago, President Obama, Speaker Pelosi and Leader Reid all touted the passage of the PAYGO legislation as some sort of Magna Carta of new fiscal responsibility they will show the nation as our big, brave, bold elected leaders.

Here are President Obama’s very own words from his very own press release about why he signed the PAYGO law in the first place on February 12:

"In a perfect world, Congress would not need a law to act responsibly, to remember every dollar spent would come from the taxpayers today - or our chiildren tomorrow. But this isn't a perfect world. This is Washington. And while in theory there is bipartisan agreement on moving on balanced budgets, in practice, this responsibility for the future is often overwhelmed by the politics of the moment. It falls prey to the pressure of special interests, to the pull of local concerns, and to a reality familiar to every single American -- the fact that it is a lot easier to spend a dollar than save one."

So the law he signed into law on February 12, 2010 is the same law that he and the Democrat leaders in your US Congress failed to enforce or follow the first week of March, the same year, 2010?  3 weeks later?

What is that, a land speed record for hypocrisy and failure to faithfully execute the laws of the land as passed by Congress?  If President Obama wasn't such a nice guy, he would be laughed off the Washington stage for such abject failure to lead and do what even he himself has promised to do just 3 weeks ago.

Why sign the darn thing in the first place if you are never going to be a strong leader and enforce it on the very next swing at the bat?  This Administration and current Democrat leaders of Congress are clearly not serious about holding down spending or reducing the deficit or debts in any way, shape or form.

Granted, Senator Bunning could have chosen another less contentious, less important bill to stand up against and try to make his point.  Millions of Americans need those unemployment benefits to survive week-to-week as this nasty recession lingers on, way past the point that the First Obama Stimulus Bill should be creating millions of new jobs if it was actually ever going to work as hoped.

But we stand by the Senator for the following 3 trillion reasons:  The amount of savings that are currently scored, explained and written in the CBO Budget Options, Volume 1 and Volume 2 (one volume is not enough anymore to point out all the savings that can and should be made from the spending side of the budget)

And then just recently, we brought to your attention the great 338-page tome that we hope you have read already (it is that important that you and all your friends should download it and read it),  “Choosing the Nation’s Fiscal Future” published by the ominous-sounding “Committee for the Fiscal Future of the United States”. There are trillions of dollars of savings in that book as well.

To his credit, Senator Bunning did propose a possible offset to this bill, one that is very common-sensical and doable:  Cut $10 billion of unspent stimulus monies out of the $787 billion dollar bill that has failed to generate a lot of jobs so far anyway.

There were no takers in the US Senate, Senator Bunning stood alone....you could almost hear the sound of crickets chirping in the background of the Senate.
The cost of this unemployment extension bill is $10 billion.  That is a lot of money.  But in the federal budget nowadays, that is almost a rounding error!  When we were working in the coal mines of the House Budget Committee way back in 1992, eons ago by now it seems, any savings under $1 billion was not even considered….it was considered almost a ‘rounding error’ and not worth the time to put into a deficit-reduction bill.

Senator Bunning is not running for re-election so some will say he did this because he didn't have to face the wrath of the voters.  We need to reward any elected official who will stand up and be counted and say what programs they will cut to pay for any new one.  You can do that today by telling any Senator who voted with Senator Bunning that they have your eternal gratitude and vote in 2010.
Posted by Frank Hill at 5:06 AM