Swing states that could go to President Trump in 2020 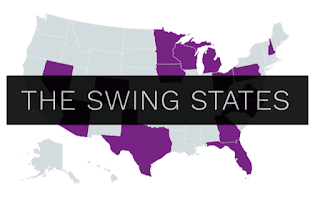 To be fair and honest journalists, shouldn’t all journalists of good will talk about every state that could flip from 2016? What if every story or commentary had a list of the states Hillary Clinton won by a whisker in 2016 and examined the possibility of them flipping to Trump in November?
Pennsylvania (20), Michigan (16) and Wisconsin (10) represent a total of 46 electoral votes. President Trump won 306 electoral votes in 2016, so if he loses those three states and every other state he lost to Hillary Clinton, he will only garner 260 electoral votes in 2020.
Joe Biden will become “President-Elect Joe Biden.” Kamala Harris will become “Vice-President-Elect Kamala Harris.” Put that on your screensaver in case you forget.
Major media outlets always include the critical states of Florida, Ohio and North Carolina in the “swing state” category. Many campaign experts on the ground think Florida and Ohio are going for Trump and North Carolina is slipping away from Biden despite millions being spent on ads across the state.
What major news media outlets don’t ever talk about are the states that Hillary Clinton barely won that could flip to Trump this time around: Minnesota (10), New Hampshire (4), Maine (4) and Nevada (6), which represent 24 electoral votes. It is as if the press has suppressed any mention of such possibilities.
President Trump could lose Pennsylvania, Michigan and Wisconsin and still win re-election with 284 electoral votes if he wins these four smaller states and keeps all the other states he won in 2016.
There are any number of scenarios that could occur this year where President Trump could win or lose re-election. Nothing is for sure except for the fact that Joe Biden, or any Democrat, starts with at least 180 electoral votes in their back pocket from blue states such as California, New York, Illinois, New Jersey, Washington and Oregon.
The “worst” Joe Biden can be beaten is approximately 358-180 in the Electoral College. No more 49-state landslides such as Ronald Reagan defeating Walter Mondale in 1984 until those big blue states become competitive politically again.
Maine is perhaps the least likely state to flip to Trump due to its unusual allocation of electors by congressional district, the only state other than Nebraska to do so. The overall winner with the most votes gets 2 electoral votes in Maine. The winner in each congressional district gets one of the 2 remaining electoral votes. Hillary Clinton won the state by less than 20,000 but she won the electoral vote in ME-1 by 58,000 votes. Trump won in ME-2 by 37,000 votes. If Trump loses in ME-1 by less than the margin he wins in ME-2 this time around, he will pick up 3 of the 4 ME votes, as Hillary did in 2016.
Insiders say that Trump is much stronger in Minnesota this election than he was in 2016 when he lost the state by 43,785 votes. He lost by only 2,732 votes in New Hampshire and 26,434 in Nevada. Trump only needs to flip 50%+1 of those votes, or 21,893 in Minnesota, 1,367 in New Hampshire, and 13,218 in Nevada to win all three states this time.
Politics is like basketball. If your team misses a layup and the opposing team rebounds and scores at the other end, that is a four-point swing — the two lost plus the two gained.
Same with the electoral college; if Trump wins Minnesota, he gets 10 electoral votes, but it means Biden also loses 10 electoral votes from 2016, for a net change of 20 electoral votes.
When you start to see major media outlets talk about all of the potential swing states going either way, then you will know honest journalism is at least trying to make a comeback when it comes to national politics.
But it won’t be this year.
(first published in North State Journal 9/30/20)