They Gathered To A Place Called Political Armageddon 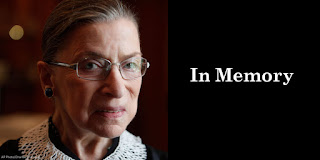 We all knew this day was coming.
From the moment Roe vs Wade was decided by the Burger Supreme Court on January 22, 1973, even though it was soon overwhelmed by the Watergate firestorm, everyone in politics knew that the issue of abortion had the potential to tear America asunder.
It has. The issue of abortion has pitted family members against family members, churches against churches and Democrats against Republicans. It has been the No. 1 litmus test for each side since at least 1980. Socialist Democrats now openly declare that no pro-life Democrat is welcome in their party. No pro-choice Republicans are in any kind of leadership position at the national level.
In a year of pandemic, economic crash and resuscitation, earthquakes, hurricanes, wildfires, riots, and a DEFCON status of 2 on the political danger scale, why not add a Supreme Court nomination and move it to DEFCON 1 six weeks ahead of the most contentious presidential election in memory?
People on the left applauded the Roe decision as a freedom and right-to-choose issue for women. People on the right chastised it for being the consummate example of judicial overreach — finding the right to an abortion under the “penumbra” of privacy provisions in the Constitution — and usurping states’ rights with a sweeping federal jurisprudence decision absent any appropriate federal or state legislative action.
Since then, every Supreme Court vacancy and subsequent nomination process has borne the patina of abortion politics, unspoken most of the time but clearly understood through coded questions and answers.
With the passing of Justice Ruth Bader Ginsberg, all non-partisan pretense has been thrown out the window. Everyone knows the next Supreme Court Justice could tip the balance of the Court into a somewhat permanent 6-3 conservative majority for the foreseeable future. Such a majority could pave the way for Roe vs Wade to not be fully overturned per se, due to the Court’s allegiance to “precedent,” so they say, but to be reversed in some way that allows the issue to return to the states to be decided state-by-state.
Forty-two Supreme Court Justices have died while in office. Twenty-nine vacancies have occurred in presidential election years. Seventeen of the presidential year vacancies have been confirmed by the Senate in addition to a couple of recess appointments that were eventually confirmed, including William Brennan in 1956.
Since 1900, there is no historical record of any incumbent president of either party refraining from nominating someone to fill the vacancy before the election.
President Trump is going to nominate either Amy Coney Barrett or Barbara Lagoa at the end of this week. Both are esteemed jurists. Both are Catholic. Both are female. Ruthlessly attacking either judge carries enormous political risks for Democrats.
If Republicans garner 51 votes on the motion to proceed to floor debate on the nomination, it will take place before the election. They have 53 senators today; they can lose Sens. Murkowski of Alaska, Susan Collins of Maine and Mitt Romney of Utah and still pass the nomination with the tie-breaking vote of VP Mike Pence, although Senator Romney has indicated his support for the nomination “if it reaches the floor of the Senate”.
Just because a president nominates someone to fill a vacancy on the Supreme Court doesn’t mean they have to be considered by the Senate. The Framers of the Constitution thought long and hard about the confirmation process and ultimately decided to give the US Senate advise-and-consent authority to approve Supreme Court appointments.
If the White House and Senate are controlled by members of the same political party, the nominee gets confirmed. If not, then the nominee would not.
Politics is just math by other means. It is not that hard to understand.
The death of Justice Ruth Bader Ginsburg has set up a political Armageddon scenario everyone thought would happen one day, even before the ink was dry on Roe vs Wade. On top of everything else that has happened in 2020, it seems to almost be a fitting coda to add the most contentious issue possible — abortion — to an already overheated divisive presidential election.
(first published in North State Journal 9/23/20)