Trump Vs "Anyone Not Named Trump!" 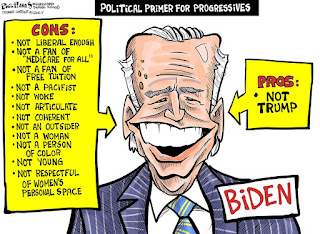 There is no energy or enthusiasm for a Joe Biden presidency in North Carolina, or anywhere else for that matter. No one can say off the top of their head what Joe Biden would do as president. He certainly does not convey a lot of confidence in having him as the next commander-in-chief when he has to read responses to pre-screened questions from his notes or a teleprompter.

This election is solely about President Donald J. Trump. You either love him or hate him. The small percentage of truly independent swing voters is going to be swayed by his message on law and order and economic prosperity or not; and they will determine if he wins North Carolina or not.

Democratic strategists said long ago that the only chance they had to win North Carolina was to nominate a moderate like Joe Biden who would not scare off independent swing voters. However, his “moderation” is being brought into question because of his adoption of the socialist Bernie Sanders’ agenda almost lock, stock and barrel, which tends to scare off such voters.

History is not on Joe Biden’s side. In 1976, Jimmy Carter won N.C. handily over a Watergate-frazzled President Gerald Ford. The only Democrat to win North Carolina since then was Barack Obama in 2008 who won by only 14,000 votes over John McCain and his forgettable “Country First” campaign. President Obama, the most attractive and charismatic Democrat to run for the White House since JFK in 1960, lost N.C. by close to 100,000 votes during his re-election campaign of 2012 to the almost-equally forgettable campaign of Mitt Romney. Bill Clinton lost to President George H.W. Bush in 1992 and Bob Dole in 1996. His wife, Hillary Clinton, lost to Trump in 2016 by 177,000 votes.

Joe Biden is going to have to throw the long ball and thread the eye of a needle to a receiver in the corner of the endzone (to mix a few metaphors) to win North Carolina. He is going to need a massive turnout of African-American voters that far exceeds the 19.7% of the final electorate of black voters who voted for Hillary Clinton in 2016. But if black turnout explodes and President Trump gets more than the 8% of the black vote than he got in 2016, say 10-12%, any advantage Biden may have gotten from high black turnout may be negated or even diminished.

Second, Biden is going to have to do a lot better among white voters than Hillary did in 2016. Biden has a 31% approval rating from white voters which is behind the very low 32% approval of white voters of Hillary Clinton.

There are no prominent third-party candidates expected to drain off 4% of the votes in North Carolina as Libertarian Gary Johnson and Green Party candidate Jill Stein did in 2016. That could be as many as 200,000 votes that will either stay at home or force themselves to vote for either Trump or Biden. 100% of the Johnson/Stein 2016 vote will not go to either candidate.

And then there is the “enthusiasm gap.” The best get-out-the-vote machine is enthusiasm for a candidate, which is very hard to measure by pollsters. When registered voters who voted in the last four elections were asked, on a scale of 1-to-10, their commitment to vote, the number of 10s recorded for Trump out-numbered those 10s recorded for Biden by a 10-to-1 margin.

Joe Biden might slip through and defy the odds and history to win North Carolina’s 15 electoral votes on Nov. 3. But it all depends on turnout, not any poll. It always has.

(first published in North State Journal 9/16/20)
Do You Want Better People to Run for Public Office?
Support the Institute for the Public Trust Today