Why Don't The Democrats Just Go Ahead and Nominate Eugene Debs for President? 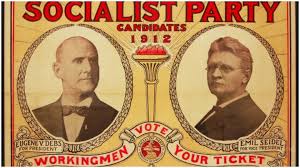 Here’s an honest question for leaders of the modern Socialist Democratic Party:

Debs and Seidel headed the Socialist Party ticket for the White House in 1912 as a minor third-party threat to the two major parties back then. Their 1912 Socialist platform reads, looks and sounds a lot like what the modern Democratic Party headed by Joe Biden and Kamala Harris has been saying for the past four years.

The Socialists of 1912 wanted to end capitalism, free enterprise, democratic republicanism and America as constituted then and now. Debs called for “collective ownership” and “democratic management of all transportation, communication, express service” (goodbye FedEx and UPS!) and “all large–scale industries.”

At least they were honest about their intentions to destroy America and replace it with historically proven failed utopian dreams. Today’s Socialist Democrats couch it in terms of “improving” an inherently broken system and replacing it, of course, with their utopian dreams of equality, peace and love.

Debs wanted to nationalize all major industries when the entire U.S. GDP was only $220 billion. That was peanuts compared to the $93 trillion “Green New Deal” proposed by today’s Socialist Democrats.

From the 1912 Socialist platform: “Capitalist concentration is mercilessly crushing the class of small business men and driving its members into the ranks of property-less wage-workers. The overwhelming majority of the people of America are being forced under a yoke of bondage by this soul–less industrial despotism.”

Sounds like the dystopian view of America today put out by the Socialist Democrats from AOC to Elizabeth Warren to Harris to yes, even now, former “moderate” (sic) Joe Biden.

Sen. Harris is on record as saying she wants to kick 180 million people off their private health plans, mostly paid for by their employers, and force everyone into a $32 trillion Medicare for All plan. Do we really want the same bureaucrats who run the U.S. Postal Service and state DMVs to convert our economy to non-carbon energy and deliver our health care?

If you vote for Biden and Harris in November, remember that is exactly what you are voting for.

Is that a quote worthy of Biden lifting without attribution for his virtual acceptance speech?

If anyone wants to deny there will be a “dystopian” future under Biden-Harris, please read the recent news. They want to: defund police; eliminate ICE; open borders to the entire world; and allow riots in all major cities in the country under the guise of “free speech.” There is no semblance of law and order or respect for enforcement of the law in any of their public pronouncements.

Debs wanted “(t)he abolition of the monopoly ownership of patents and the substitution of collective ownership, with direct rewards to inventors by premiums or royalties”. Why not? Who needs new drugs or vaccines right now anyway?

Debs wanted to get rid of proportional representation, the U.S. Senate, the veto power of the president, the Electoral College, the Supreme Court, the supermajorities regarding constitutional amendments, federal courts and circuit courts of appeal all the while calling for a constitutional convention to do God only knows what.

Sound familiar? Why don’t advocates of such nihilistic measures move to Cuba and try to help poor oppressed Cubans perfect their idea of utopian socialism instead of destroying America to rebuild in their image?

No matter how much you may despise President Trump, if you do somehow force yourself to vote for the Biden-Harris ticket, you are voting for the essence of the 1912 Socialist Party ticket of Debs and Seidel. Those results will be on your head and the consequences of your vote will be hurting your children and grandchildren for decades to come.