The Archaic Superfluousness of the United States Postal Service 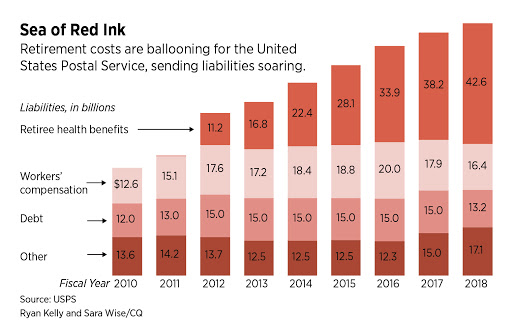 The U.S. Postal Service used to be essential to the normal functioning of the American Democratic Republic.
It no longer is. It is an anachronism wrapped in obsolescence that should be in a museum due to being left behind by 21st-century technology and sensibilities.
The post office was one of the few specifically designated responsibilities of the federal government in the new U.S. Constitution passed in 1787. Benjamin Franklin was the first postmaster general in 1775 under the Continental Congress.
But the world of 1775 America, or even 1995 America, is nowhere close to the business- and technology-driven world of America in 2020. The USPS has outlived its usefulness and needs to be phased out and ultimately eliminated.
The U.S. Postal Service of 2020 is essentially a massive taxpayer-subsidized jobs protection program that delivers mostly junk mail to your house. That is promptly thrown into the recycling bin so it can be recycled into more junk mail to be mailed at subsidized rates to your home next month and the next month and the next month.
The cost of a Forever stamp to mail a regular payment or old-fashioned letter is 55 cents. Bulk mail can be sent at a discount of up to 70% for 19 cents per piece. More than 150 billion pieces of junk mail, including 10 billion glossy print catalogs, were mailed via USPS to American households in 2016.
Without such massive taxpayer-supported bulk mail, U.S. postal workers would only be delivering a minuscule amount of “regular” mail today since so much of it has gone online with electronic payments and email. Some estimates say that 18 pieces of  “junk” mail are delivered for every piece of legitimate mail today.
The USPS should not exist primarily to serve as a mass marketing delivering mechanism for our nation’s retailers, not at a time when 50% of all commerce is now taking place online through Amazon and the online function of every retailer from Walmart to a local vendor.
The U.S. taxpayer has had to cough up close to $100 billion over the past decade to keep the U.S. Postal Service solvent. It is usually couched in terms of a “loan” from the federal government, but even government loans are supposed to be paid back one day. The Democrat House coronavirus relief package had a $25 billion loan in it for the USPS and full forgiveness of past indebtedness before it was taken out in the Senate before final passage.
Total salaries for the nation’s 620,000 postal workers has remained stable for the past decade, between $17 billion and $20 billion annually. However, health care liabilities have escalated dramatically from $11 billion in 2012 to close to $50 billion today for current employees and the roughly 500,000 postal annuitants and survivors.
Rapidly rising health care costs are making it impossible to fully cover the costs of delivering legitimate and junk mail by postage only.
Anything that is delivered by USPS today, including prescriptions, can be delivered by private carriers such as UPS or FedEx more efficiently and on time. Bulk mail can be delivered at market rates by FedEx or UPS if marketers are willing to pay the freight. If not, those marketing efforts can go online as everything else has done.
Getting rid of junk mail from the USPS would have the added benefit of saving 100 million trees and remove 5.6 million tons from our nation’s landfills annually. What could be more green than that?
The U.S. Postal Service has long served America’s best interests since our founding. But times change, technology changes and we are not going to be sending physical letter mail to the moon via USPS astronauts in Elon Musk’s Dragon spaceships in the 21st century.
It is time to begin the phase-down of the U.S. Postal Service and face the reality of the significantly diminished need for such taxpayer-supported services. We are not 1776 America anymore.
(first published in North State Journal 8/26/20)