No Summer Poll Has Ever Been Exactly Right on Election Day 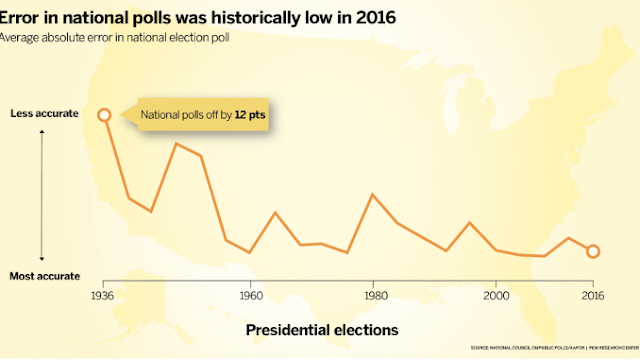 There has never been a poll conducted before a presidential election that has been right on the money on election day. Not even the last poll on the last day before Election Day.
The Pew Research Center released a report that said the error in final polls for Trump versus Hillary was a “historically low 2%” in 2016. Final polls have been off by up to 6% in elections dating back to 1960.
But 2% is a lot of voters. Almost 130 million people voted in 2016. A 2% “error” rate is 2.6 million voters swinging one way or another for or against Trump or Clinton.
That is not nearly as exact as many people believe. Polls could be off an average of 50,000 votes in every state, which could be the margin of victory in many races. Gov. Roy Cooper won in North Carolina by only 10,000 votes, to name one example.
Some people are panicking because summer polls show Joe Biden way ahead of Trump nationally and, more importantly, in the key swing states. National polls are truly meaningless when it comes to presidential races. Throw them out the next time you see one. Donald Trump could lose California and New York by 10 million votes apiece and the national popular vote by 10 points and still win the electoral college with the same number of votes, 304, he won in 2016.
If elections occurred in the summer and produced results as polls indicated at the time, there would have been only one Republican president elected since 1980: Ronald Reagan in 1984.
Campaign momentum changes from July to November in every presidential election. Mistakes are made. Foreign crises erupt. Financial swings, both good and bad, occur. Campaigns define the other candidate as the Spawn of Satan better than the opposition does in return.
In the summer of 1864, Abraham Lincoln was sure he was going to lose re-election to Democratic candidate General George McClellan, who promised to sue for peace with the Confederate government and end the war if elected. Atlanta fell to Union forces under General William Tecumseh Sherman on Sept. 3, and Lincoln went on to win 221 out of 233 electoral votes, all in the North of course.
Ronald Reagan trailed incumbent Democratic President Jimmy Carter in 1980 for most of the campaign after he held a slim 37-34 lead in late July polls. Two weeks before the 1980 election, Reagan trailed Carter by 9 points, 48-37. He went on to crush Jimmy Carter in the largest electoral blowout of an incumbent president in US history, 489-49.
Ronald Reagan and George W. Bush are the only two Republican candidates to hold a lead of any kind in late July in any of the past 10 presidential elections. Bush 43 traded leads with VP Al Gore in 2000 more times than a tight Duke-Carolina basketball game, before squeaking out the victory when the Supreme Court ruled on hanging chads and recounting votes in Florida.
President Donald Trump may wind up being the political equivalent of the meteor that hit the Yucatan peninsula 66 million years ago that wiped out the dinosaurs and left behind an interesting story for future historians to unravel.
Or President Trump could follow the trend of every Republican candidate in the past and close the polling gap in September and October after defining Biden with tons of negative ads while focusing on law and order and prosperity issues. He could demolish Biden in the debates as Reagan destroyed Carter with one simple quip — “There you go again!” — and Mondale with, “I am not going to exploit, for political purposes, my opponent’s youth and inexperience.”
It could happen. Not one prominent Democrat or Republican pollster was right about the outcome of the 2016 election during the summer of 2016 all the way up to election day. What makes anyone think they are going to be 100% correct in 2020?