About Those Mail-In Ballots.... 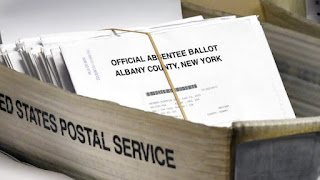 Using mail-in ballots without any safeguards, computer scanning capabilities or advanced security measures might be the most dangerous idea of the progressive left yet.
There are 250 million people 18 years of age and older living in America. About 230 million of them are legal citizens eligible to vote. Another 20 million are not legal citizens who are eligible to vote. Of the legal citizens in this country, 153 million, or 67%, of the 230 million legal citizens in America, are registered to vote.
Seventy-five million citizens who are legally eligible to vote in the US today, or 33%, are not on any legally recognized voter registration rolls in any state in America. That is not a result of “voter suppression” as many on the left want to blame on Republicans.
For the vast majority of them, it is self-chosen apathy — boredom with politics or thinking their vote does not make a difference. People have the freedom to not vote as much as they do to vote in America.
Of the 155 million people who are legally registered to vote, 138 million voted in the 2016 presidential elections. That is 90% — a very high percentage. But it represents only 55% of the voting-age population — which is pretty low.
Which brings us to the battle cry of “Mail-in Ballots in the Age of COVID!”
In-person voting ensures ballot integrity. In the olden days, people who lived in small rural towns knew everyone by face and name. They didn’t need computer facial-recognition technology because they had physical human face recognition.
As populations expanded and people became more mobile, mail-in ballots in the form of absentee ballots were used to accommodate people who could not vote in person on Election Day.
Absentee ballots are perhaps the most secure way to ensure ballot integrity. A legally registered voter has to sign a written request for an absentee ballot to be sent to their house, which can be checked by elections board staff prior to sending the ballot. When the voter has filled-out their ballot, it is attested to by another person, usually in the family, signed again by the voter and mailed back to the elections board postmarked before the election. Election officials have two steps to ensure the voter is exactly the same person as they said they were when requesting the ballot.
States such as Oregon have for years sent ballots to all registered voters to be returned by mail before election day to great success. However, Oregon and six other states have spent millions of dollars on sophisticated computer technology that can scan every returned ballot against their signature on record to make sure the person who filled out the ballot is actually the same person who is registered in that name and at that address.
North Carolina does not have that level of computer sophistication to handle such massive applications of mail-in ballots. It surely can’t be bought and set up in the next six weeks.
If states such as North Carolina went to open-ended mail-in ballots without any security systems in place, ballots would be mailed to 7.2 million registered voters with no signed requests asking for one. Only 4.7 million voted in 2016. God only knows how many of the remaining 2.5 million ballots would be filled out and returned by God only knows whom, and if they were legal citizens or not.
Google “McCrae Dowless, Bladen County 2018 congressional elections” if you need to see proof of a more modern example of what can be done with unrestricted unmarked ballots. That was not the first time Mr. Dowless did such a thing in North Carolina politics in the past 40 years.
But it was the first time in decades a political operative had been caught red-handed cheating at the ballot box at such a massive level.
A tsunami of mail-in ballots would swamp local boards of elections that would take months to comb through voter registration files and try to find a match between the signature on the mail-in ballot and their voter registration card that could have been filled out decades ago in another county.
Sending out ballots to every registered voter is asking for big trouble. Hasn’t 2020 been bad enough already?
(first published in North State Journal 8/12/20)