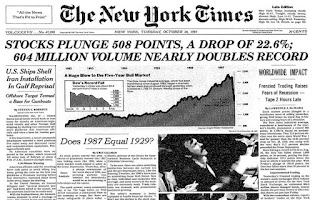 People have been wringing their hands over the past several weeks about the volatility in the market, especially the day when the stock market fell over 800 points on Aug. 5.

Many attributed it to President Trump trying to force the Chinese to play by fair rules in international commerce. The 3% dip in the stock market was a sign to them that he doesn’t know what he is doing and is just costing a lot of us a lot of money with his incompetence.

The 3% drop last week was a jitter. If you really want to know what a stock market crash looked like, Black Monday, Oct. 19, 1987, was an 8.6 earthquake by comparison.

Early that morning, most of the Republicans in Congress who played golf showed up to play in an annual fundraising event, the Bob Michel golf tournament, to raise money for the next campaign.

We were scheduled to tee off in a shotgun start around 9:40 a.m. Former Congressman Alex McMillan and I were in the same foursome with the chief legislative counsel for the Securities Industry Association, Jack O’Rourke, one the smartest and best lobbyists I ever met in Washington.

Jack met us on the first tee with a somber look on his face. “The stock market opened down 100 points” he said. Congressman McMillan, a former investment banker and chief executive officer for Harris Teeter Supermarkets, tried to calm Jack down and said, “Probably just a temporary dip, Jack.
The market will probably recover by the time we make the turn.”

It didn’t. By the time we made it to the clubhouse after the front nine, we found out the market was down 300 points.

“It will probably recover by the end of the round” everyone at the clubhouse said in unison as they ordered food and drinks for the back nine.

Two jets were flying overhead across a beautiful clear deep powder blue autumn sky as we putted out on the 18th hole.

While we all shook hands after the round, Congressman McMillan ruminated out loud, “Well, Jack, it looks like there are jets still flying out of Dulles Airport and I don’t see a mushroom cloud over Washington, D.C., so it must not have been quite the catastrophe we all were worried about.”

There was a palpable sense of doom in the clubhouse after the round. No loud bragging about their game, no celebration of the winners. There was more straight whiskey being consumed without mixers or ice cubes than anyone could remember at any event in recent memory.

As horrific as Black Monday was, and despite the fact that from 2008 to 2010, we suffered through the worst recession since the Great Depression; we experienced the largest attack on American soil on Sept. 11, 2001, since Pearl Harbor and a myriad of economic stresses domestically and overseas since 1987, the market is now trading at levels 10 times higher than Black Monday.

If we can keep the socialists from destroying the American dream, the stock market could grow 10 times more to get to the 270,000 level by 2049.

President Trump may be unconventional, but he is addressing serious unfair trade practices by the Chinese government for the past 40 years and trying to help American businesses and workers regain what is rightly theirs.

Suffering through several days of relatively minor stock market volatility by comparison to Black Monday in order to rectify the trade imbalance and injustice with China seems to be a small price to pay.