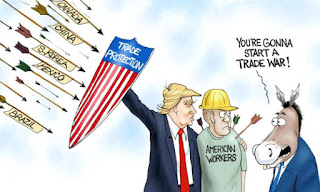 Tariffs are bad. They are just “taxes” by a different name.

Higher taxes and tariffs retard economic production and growth. The higher the tax, or tariff, the lower amount of product is sold.

Would the imposition of the Trump trade tariffs lead to a worldwide recession all by themselves as some fear? Or will they lead to a tariff-free world which has been the dream of every free market philosopher in history?

The total amount of trade on which new tariffs could be imposed by President Donald Trump is approximately $640 billion in dollar terms on items shipped from China, Canada, Mexico, the EU and Asian Rim countries to the United States.

The amount of business transacted worldwide today is roughly $80 trillion in dollar-denominated terms. Global economic growth is expected to be 5 percent this year, so world GDP could grow by an additional $4 trillion on top of the current level of $80 trillion.

If the tariff rate imposed by the U.S. is 25 percent on $640 billion of trade in volume, $160 billion would be collected by the Trump “tariff/tax hike.”

The Trump-imposed tariffs would represent a miniscule 0.2% percent of world GDP output for the entire year. They would amount to only 4 percent of the nominal GDP growth of the entire world of $4 trillion over the next year.

Both assume that the tariffs will be enacted. Many say President Trump is using the “threat” of imposing tariffs to force nations to the bargaining table to get a better deal for Americans.

What is truly big and significant?

Up to $600 billion annually in America alone; four times the size of the possible Trump tariffs. That is as if the GDP of the state of Ohio is removed from American soil and given to Chinese workers and government enterprises as a gift each year.

China has been stealing intellectual property rights in the form of patents, copyrights and designs for decades from every advanced nation on earth. Intellectual property protection is the core of free enterprise everywhere around the globe. Failure to protect IP from being stolen without due process and payment of royalties devalues every product, service or technological breakthrough American inventors, creators and businesses make every day.

Chinese government and corporate engineers and businesses steal designs and technology from every sector imaginable and then manufacture products at very low wages and costs so Chinese products dominate the market and then destroy their foreign competitors who invented it in the first place.

The Trump strategy appears to be coming into focus: Revamp existing trade agreements with all trading partners around the globe first and then build a worldwide coalition against the Chinese to force them into submitting to the basic tenets of fair play in a world of free trade.

Otherwise, a coalition will in effect erect global trade embargoes on China to bring their economy to its knees until they do agree to play by the rules of free and fair trade.

No previous administration or Congress has taken such a blunt force posture toward China. Gentle or turning-the-other-cheek diplomacy obviously has not worked in the past, so why not try another tactic?


Such blunt force may be the only way to bring China into the community of nations where true free trade can prevail for the 21st century.