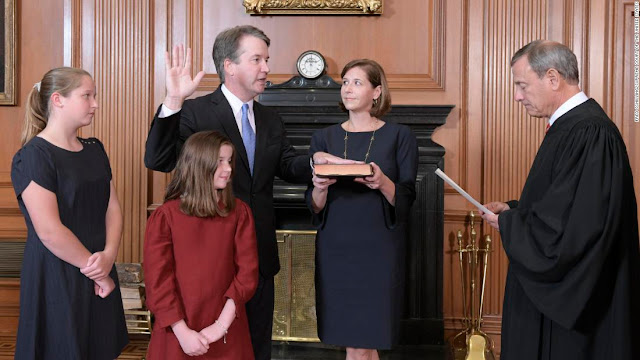 Why does our political discourse get so nasty from time to time?

Since 1973, it has been abortion rights post-Roe v. Wade.

Minnesota Senator Joe McCarthy gained nationwide notoriety in the early 1950s by mercilessly accusing 205 public servants in the State Department of being ‘card-carrying communists’ often without offering any evidence to back up his claims.

On June 1, 1950, freshman Maine Senator Margaret Chase Smith gave a speech on the floor of the US Senate as the first Senator to take McCarthy to task for his reckless ways which was the beginning of the end for him politically.

68 years later, another brave Maine Senator, Susan Collins stepped up to reverse the collapse of decency which hopefully hit its denouement in the Kavanaugh hearings.

Nowhere has vitriol been more on display than during US Supreme Court nominations since 1987:


Students of history will notice that the nominees who were most viciously attacked were conservative Republican jurists. Robert Bork, Clarence Thomas and Brett Kavanaugh were ruthlessly savaged by Democratic Senators in public.

The truth of the matter is that these bloody nomination battles had little to do with personal character issues or even judicial philosophy and temperament.

When a justice was nominated whose judicial philosophy threatened the fragile majority on the Court as it pertains to abortion rights, these nomination fights got nasty very quickly.

The only Democratic nominee who was ‘not treated fairly’ in the eyes of Democrats was Merrick Garland in 2016. Former Democratic Senator Joe Biden, Chairman of the Senate Judiciary Committee had this to say about nominations during a presidential campaign year in 1992:

“(President George H. W. Bush should) not name a nominee until after the November election is completed” (and, if he did), “the Senate Judiciary Committee should seriously consider not scheduling confirmation hearings on the nomination until after the political campaign season is over.”

Former Democratic Senate Majority Leader Harry Reid invoked the ‘nuclear option’ when he allowed votes on judicial nominations during the Obama Administration without requiring a 60-vote hurdle to close debate and proceed to the vote on the nomination.

Short of a political truce or a medical technological breakthrough to allow a transfer of a human zygote to another host to take it to term, such nasty political attacks will continue.

The only way to prevent them is to elect new Senators who won’t stoop to such base level tactics to win at any cost.

It does not do the American Republic any good when they do.