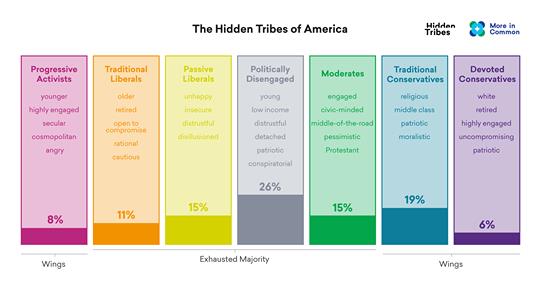 The great majority of Americans are neither radicals nor reactionaries. They are middle-of-the-road folks who own their own homes and work hard and would like to have the government get back to its old habits of meddling with their lives as little as possible…It sometimes seems as if this great ‘silent majority’ had no spokesman. But (he) belongs with that crowd; he lives like them, he works like them, and understands’.

In 1968, the Democratic National Convention in Chicago erupted when student protesters against the Vietnam War clashed with older mainstream Democratic delegates on the convention floor and then with police outside as protests turned violent.

Middle-of-the-road American voters nationwide watched the riots in the streets of Chicago on the evening news and reacted with horror and disgust.

Republican presidential candidate Richard Nixon called on this ‘silent majority’ of voters to vote for him to bring law and order back to the streets of America. Nixon soundly defeated Democrat
Minnesota Senator Hubert Humphrey and third-party candidate Alabama Governor George Wallace to win the White House in the fall.

50 years ago, the national Democratic Party forgot the ‘silent majority’.  They apparently have forgotten them again in 2018.

Democrats win when they have candidates such as Bill Clinton and Barack Obama appealing to the basic common interests of all Americans regardless of race or class.

Just as Republicans do when they do the same.

The current Democratic Party offers voters none of those. They embrace mob rule; denying opponents of their right to free speech; willfully disdain of national immigration law; establishment of sanctuary cities and ‘free everything’ from education to health care regardless of cost to the taxpayer, tens of millions of whom are part of the ‘silent majority’.

Democratic mobs harass Republicans when they go to restaurants (Senator Ted Cruz and his wife); wail primal screams in the gallery during confirmations of Supreme Court nominees (Brett Kavanaugh); they even tried to shout down 95-year old former Secretary of State Henry Kissinger at NYU last week while yelling ‘Rot In Hell!’ ‘Rot in Hell!’

Those are not winning arguments to get the silent majority on your side. Any competent political consultant on either side will tell you that.

The other 80%~ voters are the ‘Exhausted Majority’. All they want is the government to work together to get things done and stop blaming everyone but themselves for their failure to do so.

Just like the Silent Majority voters of years gone by. The same bell curve of voters who have existed since the beginning of the American Democratic Republic.

Older idealistic Boomers who grew up in the tumultuous 60s are now on both extremes running our national politics. In many ways, our idealism has proven to be a disaster, the national debt being a prime example. Boomers would rather be proven ‘right’ on every issue rather than compromise on any common solution for the good of the nation.

The report confirmed what many seasoned veterans of campaigns have been saying for the past 20 years: Republican and Democratic candidates are not speaking directly to the interests of the independent, unaffiliated voters or any moderate registered Democratic, Republican or Libertarian voter.

Was Bruce Barton of Colliers Magazine talking about Richard Nixon or Donald Trump in the opening quote above?

No. He was talking about Massachusetts Governor Calvin Coolidge. In 1919.

Maybe history really is repeating itself. Every 50 years or so, the silent exhausted majority is ignored.

Until they rise up at the polls.