Cut All the 'Red Tape' Out of the Federal Budget 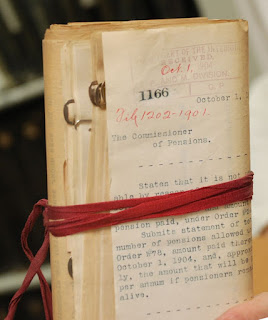 Until 1925, the federal government used to wrap official federal documents in red tape. It made things look ‘official’, borrowing from regal Spanish and British traditions of long ago.

President Calvin Coolidge and his budget director, Herbert Mayhew Lord, with whom he met personally every Monday morning at 9:15 am sharp, reasoned that if they replaced the official ‘red tape’ with regular white string, they could save tens of thousands of taxpayer dollars each year.

President Coolidge and Lord literally ‘cut the red tape’ out of government spending.

Even ‘waste in government’ was turned into budget savings. An employee on the General Supply Committee figured that ‘seven barrels of spoiled, soused (pickled) seal shoulders from Alaska’ could be sold for $20 as ‘crab bait’ to New England fishermen.

It worked. Under President Coolidge, the federal budget was reduced to close to $3 billion (not trillion) and held flat for his 6 years in office. As a result of his initial tax cuts, the economy took off and generated surplus revenues to the federal treasury which, combined with budget restraint, allowed the Coolidge Administration to reduce overall federal debt by 33%.

The major thing missing in that equation in Washington lately has been ‘budget restraint’. We did not have a Calvin Coolidge in the White House when Presidents Obama and Bush 43 were occupants.

It remains to be seen if President Trump will put the brakes on spending; he has 2 more years to become the next Coolidge.

We have not had a majority of 50%+1 Democratic or Republican Calvin Coolidges in the US Senate or Congress either where it really has to start anyway.

What is so hard to understand about not spending other people’s money?

Former Congressman Alex McMillan with whom I worked for a decade used to say that he thought of every new dollar spent by the federal government as if it came from the pocket of a hard-working person to whom $1 was very important. He was determined not to spend that person’s hard-earned dollar in a frivolous manner not critical to the overall best interest of the nation.

What would the budget look like today if everyone thought the same way? Would we spend taxpayer money on expensive pork-barrel projects such as the Railroad Museum in Strasburg, Pennsylvania?

Or the Bridge to Nowhere in Alaska? How about any superfluous and unnecessary defense program that out-lived its usefulness in the last war?

If you are a liberal and like the idea of more federal welfare and support programs, you have been duped for the past 40 years.

Explosive growth in spending on health care entitlements, Medicaid and Medicare plus the military and veteran health plans have crowded out spending on domestic programs which in 1960 was 68% of the budget.

Here’s an indisputable fact: If we hold medical cost inflation to 1-2% per year or below, we could balance the federal budget in the next 5 years with no tax increases and no other cuts in the budget anywhere.

But we need to elect modern-day Coolidges to elective office first. To cut more than red tape.