'The Best Welfare Program Is A Job' 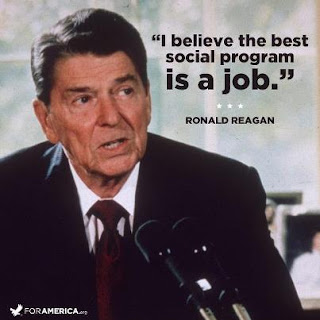 The difference between liberal and conservative ideology can best be seen when confronted with numbers such as the following from a recent Joint Legislative Committee hearing in the North Carolina state legislature on Medicaid enrollment:


To what specific factors can these declines be attributed?

Republicans tend to point to the improving economy and lower unemployment rates for much of the declines in Medicaid enrollment across the state. People who get jobs that provide health care coverage typically go off Medicaid eligibility and on to private plans.

The average stay on Medicaid for non-long-term disabled citizens is about 10 months contrary to public opinion where many assume once a person goes on Medicaid, they are there for life.

Democrats tend to focus on other reasons such as availability of information to people eligible for Medicaid but do not know how to enroll; possible flaws in collection of statistical data and fear by illegal aliens living in North Carolina to apply for Medicaid benefits and risk possible deportation.

All play into possible explanations.

What is the main 'correct' answer though?


'The best social program is a productive job for anyone who’s willing to work'.

'Welfare’s purpose should be to eliminate, as far as possible, the need for its own existence'.

To many unfamiliar with the liberal/conservative divide over the past 50 years, President Reagan’s words sound like common sense regardless of which side of that divide you may be on.

There was a time in modern American history where the majority of Republicans and Democrats ascribed to that notion of self-sufficiency and hard work.

However, since the advent of the Great Society programs under LBJ in 1965 and subsequent amendments and welfare programs added to our federal budget since then, many on the left have come to see increases in numbers of people on welfare or entitlement programs as a sign of 'success' of the modern welfare state in America.

Conservatives take an opposing view. They tend to see reductions in enrollment numbers as evidenced in the Medicaid hearing as a sign of great success in economic growth policy since many people who were not on Medicaid since 2016 must have found a job and are now working in a productive capacity to provide for themselves and their families.

Republicans see ‘success’ in welfare programs when the need for or dependency on them is dramatically reduced. Every able-bodied individual who can work should work is their line of thinking. It helps self-worth, self-esteem and keeps families and communities together.

If liberals want to help to achieve such a utopian goal, every effort should be made to allow private businesses to expand and hire as many people as possible. Any effort to hamstring American business with over-regulation, higher taxes and more government debt almost by definition frustrates their ability to hire new workers, many of whom need job training and residual education usually provided by the new employer to leave public welfare for good.

Whenever a liberal politician seeks to punish a rich person who has built a business with higher taxes or regulation, they need to keep in mind that the people they are really hurting are the lower-income people currently surviving on welfare programs who will not be hired if taxes, spending and regulations go up.

What is going to be: more government welfare or more personal work opportunities?