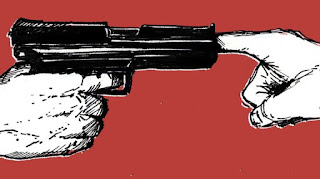 As shocking as the Parkland school shootings were, there have been other school shootings in American history that have been equally as ‘shocking’: the Columbine murders in 1999, the Virginia Tech massacre in 2007 and perhaps the most disturbing school shooting ever, Sandy Hook Elementary School in Newtown, Massachusetts in 2012.

They followed the same pattern: mentally-disturbed individuals somehow gained access to semi-automatic weapons and went to the school to exact revenge for bullying or because ‘demons told them’ to do so.

Sadly, the debate following each massacre usually follows the following script and rhythm:
And then the energy dissipates like a passing thunderstorm. Until the next mass shooting on a school campus.

What can be different this time around?

First of all, some facts might help frame the debate:


When it comes to politics, legislators have to first consider ‘the art of the possible’. Federal government confiscation of 10 million assault rifles or 300 million firearms simply is not a viable solution when one considers the magnitude and danger of such an undertaking.

Those are simply massive numbers.

99.99% of all gun owners do not use guns for violent purposes against another person each year.

Plus they have Second Amendment rights to own a gun. Gun control activists would have a greater chance of repealing the 2nd Amendment than they would confiscating some, part or all of the firearms in America today. Which would be next to zero.

Instead of considering comprehensive legislation which will probably peter out as so many have done before, perhaps there is one issue where all sides could agree to focus legislative attention and see if a small change can yield at least some positive results.

As in no more mass shootings in public schools.

In 1967, California passed the landmark Lanterman-Petris-Short (LPS) Act which made it very difficult for one person to commit another person involuntarily through the judicial system to a psychiatric hospital without evidence of that person harming someone or themselves. The criteria for involuntary admission shifted from proof of the individual’s inability to make ‘responsible choices’ to the ‘presence of dangerousness’ of that person.

We have had a collision of individual personal privacy rights versus protecting the common welfare of our citizens and schools ever since with no clear rectification on the horizon. We can’t sit back and wait to see if another mentally disturbed person kills more school children before committing them to a mental hospital.

Perhaps everyone needs to start looking at this issue through the other end of their telescope and worldview and focus on finding one solution that might work.

Correcting our admittance standards and process for committing seriously mentally-ill people like the shooter in Parkland Florida to a mental institution before they kill dozens of young students is a place to start.