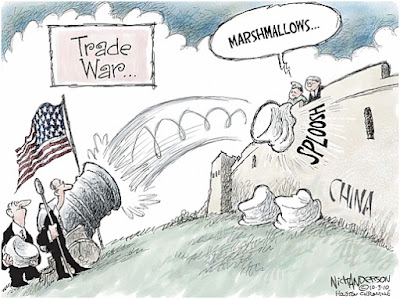 President Trump’s announcement of tariffs on steel and aluminum set off a spate of comments comparing his actions to the Hawley-Smoot tariff act that many feel precipitated and certainly exacerbated the Great Depression of the 1930s.

Is he starting a ‘trade war’ for no good reason at all? Or is he positioning the US for a much-needed review and rewrite of NAFTA and other bilateral and multilateral trade agreements?

The history of American trade policy has not evolved much since the end of World War II. After the war, the highest priority was placed on establishing GATT (General Agreement on Tariffs and Trade) with devastated countries such as West Germany and Japan to help them develop free market economies that would support freedom and democracy.

Making trade concessions to help export freedom and democracy was far more preferable than fighting another world war against them, this time with nuclear weapons.

GATT morphed into the World Trade Organization (WTO) in 1995 which became the forum to govern international ‘free trade agreements’.  The WTO is currently the only mechanism we have to monitor trade between the US and Japan, the EU and China.

One of the industries that became a sacrificial lamb for trade agreements, sadly for North Carolina, was the textile industry. Textile manufacturing was labor-intensive and required relatively low working skills which was perfectly suited for workers in developing countries such as China and then southeast Asia.

As time went on, successive Administrations and State Departments continued to make trade concessions to help nations develop and create jobs primarily as a foreign policy tool, not as an economic tool to defend and protect American jobs.

The only problem is that China has failed to convert to democracy after all these years. And they are clearly taking advantage of our lax enforcement of existing agreements to become the second largest economic power in the world.

Now should be the time to stop using trade as a foreign policy tool and revert to rewriting trade agreements solely on economic fairness and equity grounds to all parties.

Most trade agreements have provisions that call for ‘countervailing tariffs’ in the event a country subsidizes manufacturing, manipulates currency or steals intellectual property rights that lead to a surge of exports to the US. The US, at the behest of the State Department, has routinely turned a blind eye to such grievances and allowed cheaper imports to flood into the States.

After all, who doesn’t want to buy a dozen T-shirts for $10 from Wal-Mart?

In Senator Elizabeth Dole’s office starting January 2, 2003, we sent weekly textile job loss reports to the Vice-President’s office. By August, the total was 52,000 and we were begging the Bush 43 Administration to invoke the surge protections, or countervailing tariffs, already existing in the textile agreements.

In August of that year, Pillowtex in Kannapolis announced it was laying off 7000 people.

‘What is going on with the NC textile industry?’ asked the Vice-President’s office. After close to 60,000 jobs had been lost to unfair textile importation in 8 months.

President Bush signed an executive order raising tariffs on 3 categories of lingerie from China but by then, the damage was done and the response was too little, too late.

Enforcing trade agreements has been the US problem for decades. It is not a ‘trade war’ to demand our economic allies and partners abide by the rules of fair but free trade and not take advantage of US workers.

Perhaps President Trump is opening a gambit to force trading partners back to the table to get more favorable treatment for American workers and force China, among others, to play fair.

That is not a ‘trade war’. That is ‘insisting on fair play’, ‘demanding enforcement of trade agreements’ and ‘negotiating to win’.