Is Health Care A 'Right'? 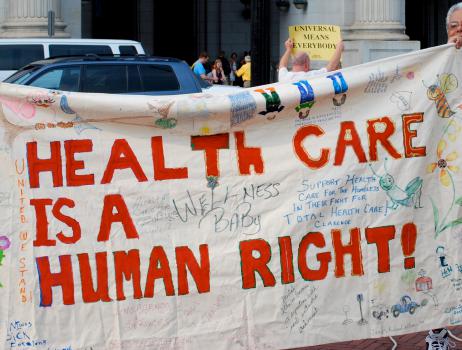 'Is health care a right? Explain'

"'Individual Rights' tend to be free” was the reflexive answer. “Everything else is negotiated between parties and factions in the legislative process about who is going to pay for whatever government program is being proposed'.

The first 10 Bill of Rights amendments concern freedoms that would be guaranteed in the new democratic republic.

We are free to speak at no monetary cost to anyone. We are free to worship in any religious tradition we choose and no one is forced to pay for our actions. We can print anything in the press as long as we pay for the computers, internet and printers to circulate our thoughts.

The 2nd Amendment guarantees the right for an individual to bear arms. The government does not pay for them.

The 3rd Amendment restricts the quartering of soldiers in our homes. Freedom of privacy in one form in essence.

The 4th Amendment protects us all from unwarranted invasion of our homes for search and seizure of evidence without a warrant based on probable cause. Another defense of our right to privacy essentially.

The 5th Amendment guarantees our right to be considered 'innocent until proven guilty'.  It might cost a lot in legal fees to defend that innocence but not from appropriated tax dollars unless you are indigent and need legal aid.

The 6th Amendment guarantees our right to a speedy and fair trial which might cost money for legal defense but not from appropriated tax dollars.

The 7th Amendment guarantees our right to jury trials in federal civil cases involving amounts of more than $20.

The 8th Amendment protects us from excessive bail or 'cruel and unusual punishment'. No federal governmental appropriations are involved unless you count the billions of dollars spent each year to house hundreds of thousands of prisoners convicted of felonies, many of whom are in for life sentences instead of receiving the ‘cruel and usual punishment’ of the death penalty.

The 9th Amendment recognizes other fundamental individual rights not enumerated in the Constitution but doesn't say what they are. None of which seem to require federal appropriations.

When it comes to health care, Social Security, Medicare, Medicaid, national defense, interest on the national debt, environmental protection, welfare, education and agricultural subsidies, they are legislative issues that have to be debated, negotiated and voted-upon by our elected representatives in the US Congress and Senate as opposed to being ‘rights’ or even ‘entitlements’ that are conferred upon each person at birth.

In the private world, no one has the right to ‘demand’ another person ‘pay for’ their retirement, housing, education or health care needs. Charitable wealthy people often pay for such services out of the goodness of their hearts through eleemosynary organizations such as churches and non-profits but no one really has to do it unless they choose to do so freely on their own accord.

Providing social safety nets and all government programs require political efforts to coerce others to pay for them through majority vote and democratic republicanism.

One ‘freedom’ which should have been enumerated in the Constitution would have guaranteed the freedom of one generation from having to pay the debts of previous generations. Every generation should be forced to pay for the government services they vote into law, except for perhaps the cost of preserving freedom in world wars.

Not the next generation of unborn children who can’t vote yet.

Maybe it is time for a 28th Amendment to say so.