'30 Million Jobs Have Been Created Since President Trump Took Office!' 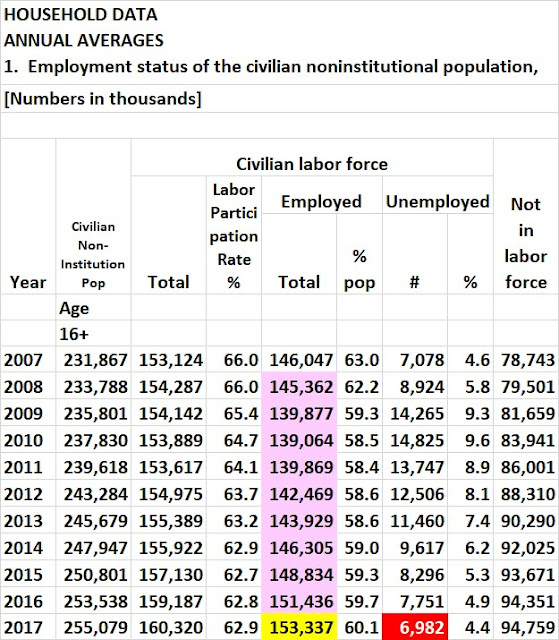 The headline above could have been written with a straight-face by any media outlet and been technically 'true' about the American economy in the last year since President Trump took office.

The only problem is that the following sub-headline would have to have been published below it stating this other ‘inconvenient truth' about the dynamic American economy:

'27.8 Million Jobs Also Have Been Destroyed Under President Trump, Too!'

The net difference though is a solid increase of over 2.2 million in 'net new jobs' created since Election Day, November 8, 2016. The key to any understanding of employment numbers under any US President or political party controlling Congress and the US Senate is to look at the net difference in jobs created versus jobs lost during any particular term in office.

Presidents get way too much credit for economic job growth when it is good and way too much blame when the numbers are bad. Except for Presidents Herbert Hoover and Martin van Buren, both of whom made perhaps the exact wrong policy decisions at the exact wrong time when faced with economic downturns and only made bad situations devastatingly worse.

The American economy is a thoroughly dynamic jobs machine that sees roughly 10% of all jobs change during any particular quarter of the year. 5% of total employed positions are created and 5% of existing jobs are eliminated.

The potency of the American economy would make the author of the 'creative destruction' theory of employment in 1942, Joseph Schumpeter, blush with pride.

Businesses are either hiring people for new companies or expanding older ones to meet business demand or they are shedding workers because of loss of business and revenue regardless of who is sitting in the White House or on Capitol Hill every day.

Economic cycles come and go. Political leaders, however, can make decisions and set policies that allow recessions to go away rather quickly and enter into another round of growth and economic expansion. Or they can throw wet blankets on the economy such as we saw under President Obama where super excessive numbers of federal regulations were loaded up on business and higher taxes imposed on individuals that essentially forced much of the American business community to go ‘on strike’ for most of his 8 years in office.

The fact that President Obama is the first, and only, President in recorded modern history to have never presided over a single year where GDP annual growth rates exceeded 3% should tell everyone something about his economic policies. The average annual GDP growth rate during his entire 8 years as President was only about 1.6%.

The key thing to remember whenever you see news reports about 'unemployment rates' is that the only true barometer of such things is the absolute number of people who are currently working in a full-time job, not the unemployment rate.

The ‘unemployment rate’ is an easily manipulated and misunderstood statistic that should be retired forever. It is based on the number of people who are ‘actively looking’ for a job which can distort the unemployment rate if people get discouraged and leave the workforce altogether.

The much more meaningful statistic is the absolute number of people who are working full-time which at the end of 2017 was 153,337,000 people as indicated in the chart below. If you follow the monthly reports from the Bureau of Labor Statistics (BLS) and chart it like you would do a baseball game, you would very clearly see the relative health or sickness of the US economy due to the total number of people working full-time.

If the US economy is allowed to function without excessive regulation and taxation, 200,000 or more Americans each month might be able to find that great job that has eluded them for the past decade.