'Mr. President: The Economy (In the Rest of the Nation) Is Not 'Just Fine'!' 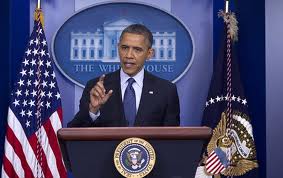 We just returned from Washington DC where we were helping our son move into a new place as he starts his residency at Georgetown University.

As we drove around Washington and Northern Virginia, we were struck by two things:

1) The traffic. (It has gotten worse. Unbelievably so)
2) There were hardly any 'For Sale' or 'For Lease' signs on boarded-up buildings and businesses.

We started counting them as we waded through the traffic on Wisconsin and M Streets and steered clear of the hordes of people lining up to go into shops such as the Georgetown Cupcake store where they had police monitoring the lines so they would not get run over by on-coming traffic in those tiny side streets.

We came up with maybe 3 'For Lease' signs in all of Washington or Georgetown.

We saw 3 of them in one small corner of a strip mall in Charlotte alone when we returned late last night.

What in the Sam Hill is going on?

We now fully understand why President Obama 'confidently' confirmed to the nation recently that 'the private sector is doing fine' in his press conference that caused him so much grief.

As President Obama drives around Washington and Georgetown and probably Hollywood for his fundraisers, he probably doesn't see any 'For Lease' or 'For Sale' signs popping up all over the place like daisies.

There is a veritable economic boom going on in the Washington DC area!

And why not? The economic stimulus was mostly for more government services which leads to more government spending, contracts and ancillary services such as legal, consulting and accounting work, all of which Washington has in spades.

We saw one beautiful home in Georgetown that was for sale for '$202....' which may have been the phone number on the sign come to think about it. But you could tell it was expensive. And would probably sell for more than the listing price in that government-spending fueled economy up there.

Nothing is wrong with a government job.  We had one for 12 years on Capitol Hill. We know tons of people who do great work as soldiers, military personnel, accountants at the Pentagon and scientists and researchers at the NIH who do it because they like being 'public servants' in the truest sense of the word and have always done it in order to serve the greater good of our nation.

Can we really and truly and honestly expect to be able to resuscitate the entire moribund American economy by pumping in more stimulus money through government contracts in every area of the nation so that we can all live as well as the people in Washington, DC, Georgetown and Northern Virginia seem to be doing right now?

40% of which is borrowed from the Chinese as part of the fastest expansion of federal debt in American history since WWII. What happens when that dries up?

We saw a great HBO movie recently about the economic meltdown on Wall Street that led to this mess, 'Too Big To Fail' (you need to see it as well). One scene showed the Chinese treasury minister lecturing then-US Treasury Secretary Hank Paulson about the dangers of having excessive foreign debt as he mentioned the possibility that Russia and China were thinking about dumping hundreds of billions of their bond holdings in Fannie Mae and Freddie Mac on the market one random day.

We don't have room here to fully unwind the cash flows as they move from government contract to consultant to lawyer to accountant to contract manager to the workers on any particular infrastructure project around the nation.

It appears to be 'working' in Washington DC,. Georgetown and Northern Virginia, at least temporarily.

What happens to all of this economic activity though when a new Administration or Congress comes in to clamp down on federal spending and all these contracts disappear into thin air? (Don't laugh. It could happen one day you know. Probably under a new political party that erupts out of this tsunami of dissatisfaction that is building against both major political parties right now)

It ain't working to jump-start the rest of the national economy, Mr. President. Things out here just 'ain't fine' no matter what you might see everyday around the White House. And there is no amount of tax money that can be raised from the pockets of hard-working Americans that is large enough to do the same thing in Kalamazoo, Michigan and every other Main Street, USA as what has been done in Washington DC.

Only full restoration of confidence in the Executive in the White House and in the US Congress to do 'the right things' on fiscal and economic policy will trigger the magical 'invisible hand' that Adam Smith talked about to 'arouse the animal spirits' which drive people to take economic risks and try to make money for themselves and their families.

This will lead to the creative job creation we all need and so desperately want to see in America today.

Will President Obama and Congress let us have it again...or do we have to wait another four years to wait, wonder and worry about our economic well-being?