Who Would You Rather Have A Beer With? 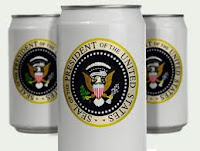 It might could come down to such a basic decision made by millions of voters in 2012, most pointedly in the following targeted battleground states: North Carolina, Virginia, Colorado, Florida, Iowa, Nevada, Ohio and New Hampshire.

Larry Sabato of The University of Virginia has written a very good summary of the prospects for President Obama's re-election in 2012. It is all in the Electoral College, just like the Founders planned it and chiseled into the good old US Constitution in stone. Changing it would require a constitutional amendment process that would not be unlike trying to repeal the Second Amendment freedom to own guns...every effort to amend the Constitution is difficult and hard as heck to do.

But getting back to the 'Beer with the President' thing.

Lee Atwater, the consummate campaign strategist and, at times, attack pit-bull viper of Republican politics in the 1980's, had a unique gut feel for all things political in America, then and now even though he passed away from a brain tumor in 1991.

People want to see many things from their President, especially on the campaign trail BEFORE they give him or her their precious vote in the election.

They want to see: courage, leadership, vision, likeability, brains, a sense of humor (insert your own preference)

But Lee Atwater also pointed out an odd thing about modern American politics. In addition to wanting 'the next President' to be the 'Next George Washington' or the 'Next 'Honest Abe' Lincoln (we sure could use one right now, couldn't we?), the American public wants their president to be 'someone they would want to have a beer with.'

Think about that for a minute.  Besides protecting us from the evil terrorists from Al Qaeda; creating jobs for us all and turning this economy around; cleaning up the environment; finding some way to get gasoline for our internal combustion engines back down to $1/gal 'where it belongs!', we want our President to be 'friendly enough' that we would want to sit down and have a beer with him or her and talk about the Green Bay Packers or the New York Yankees or some new song by the Black Eyed Peas.

How crazy is that?

Last night's Republican presidential candidate debate gives us a chance to put Lee Atwater's test to the test so let's see if what he says holds true.

Go back to 2008. Who would you had rather had a beer with, Obama or McCain?

Obama, hands-down. Much more pleasant looking and sounding, ready smile and lean athleticism about him.

2000? W or Al Gore?  We still can't get over Darrell Hammonds' dead-on impersonation of a wooden, stiff Al Gore in the presidential debates.

Clinton over Bob Dole? Bill Clinton wins going away.
Clinton over both Bush 41 AND the non-Dana Carvey version of Ross Perot? Clinton.
Bush 41 over Dukakis? Bush.
Reagan over Mondale? No contest.
Reagan over Carter? Puh-leeese!

Carter or Ford? Very tough decision because Gerald Ford was one of the most likable people in all of American politics and an All-American football player on a national championship team at Michigan back in the day. But the distortions caused by Watergate doomed Ford, sadly.

Nixon over McGovern? Hard to admit it but yes, Nixon in a squeaker. Except no one knew he was also going to bug the Democratic headquarters at the Watergate while you were out drinking a beer with him.

Nixon over 'Hube the Cube'? 'HHH'. Hubert Horatio Humphrey of the Great State of Minnesota. Jimmy Carter in his acceptance speech at the 1976 DNC Convention unwittingly spout out the word 'Hornblower' after 'Horatio' if that gives you any indication of the tinniness and loquaciousness of HHH. Nixon, if only for brevity's sake.

LBJ over Goldwater in 1964 after Goldwater essentially said he would drop The Bomb on Vietnam and any communists anywhere. That, plus the shock that still lingered from JFK's assassination the year before gave LBJ, who was not the most lovable or even likable American President at all, a landslide victory matched only by Reagan in 1984.

Kennedy over Nixon. Not even close. Beer with a Kennedy? Are you kidding?

And Dwight David Eisenhower...over anyone. They didn't make millions of 'I Like Ike!' campaign buttons because he didn't lead the Allies to victory over the Nazis in World War II for nothing.

So when you are watching Ron Paul rail on about the Federal Reserve or Newt Gingrich get some digs in at the media or Michelle Bachmann say she can get the price of gas back down to $2/gallon...somehow, just think to yourself: 'Can I see myself having a beer with this person for the next four years and having them tell me this stuff over and over and over again?'

Or would rather have a beer with President Barack Obama for the next four years, after 2012, that is?

'Waiter! Could you make that a triple Boilermaker to go...please?'
Posted by Frank Hill at 3:12 AM