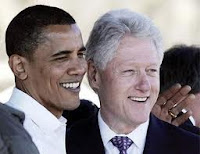 You know, we have been following the whole 'birth certificate issue' of President Obama with a shaker of salt.

Until his press conference last Wednesday.

As he was speaking, the 'hit rewind' button in our mental VHS started whirring and all we could think was: 'We have seen this show before'.

First of all, we thought his handlers said they couldn't find the 'long-form' a long time ago.  And that President Obama had revealed all he was ever going to reveal on his birth certificate so that was it, over and out!

Recall in 1998, President Bill Clinton made the following forceful statement on national television denying his involvement with Monica Lewinsky:


'Now, I have to go back to work on my State of the Union speech. And I worked on it until pretty late last night. But I want to say one thing to the American people.  I want you to listen to me. I'm going to say this again: I. did. not. have. sexual. relations. with. that. woman, Miss Lewinsky. I never told anybody to lie, not a single time; never. These allegations are false. And I need to go back to work for the American people. Thank you.'

We were struck by some of the same-sounding phrases and sentence constructions found in President Obama's statement on Wednesday about his birth certificate. See if some of the similarly-highlighted passages below don't sound like they were taken from the same playbook:

President Obama’s ‘This is My Birth Certificate!’ Statement, April 27, 2011


THE PRESIDENT:  As many of you have been briefed, we provided additional information today about the site of my birth. Now, this issue has been going on for two, two and a half years now. I think it started during the campaign. And I have to say that over the last two and a half years I have watched with bemusement, I've been puzzled at the degree to which this thing just kept on going. We've had every official in Hawaii, Democrat and Republican, every news outlet that has investigated this, confirm that, yes, in fact, I was born in Hawaii, August 4, 1961, in Kapiolani Hospital.

We've posted the certification that is given by the state of Hawaii on the Internet for everybody to see. People have provided affidavits that they, in fact, have seen this birth certificate. And yet this thing just keeps on going.

Now, normally I would not comment on something like this, because obviously there’s a lot of stuff swirling in the press on at any given day and I've got other things to do.

But two weeks ago, when the Republican House had put forward a budget that will have huge consequences potentially to the country, and when I gave a speech about my budget and how I felt that we needed to invest in education and infrastructure and making sure that we had a strong safety net for our seniors even as we were closing the deficit, during that entire week the dominant news story wasn’t about these huge, monumental choices that we're going to have to make as a nation. It was about my birth certificate.  And that was true on most of the news outlets that were represented here.


And so I just want to make a larger point here. We've got some enormous challenges out there. There are a lot of folks out there who are still looking for work. Everybody is still suffering under high gas prices. We're going to have to make a series of very difficult decisions about how we invest in our future but also get a hold of our deficit and our debt -- how do we do that in a balanced way.

And this is going to generate huge and serious debates, important debates. And there are going to be some fierce disagreements -- and that’s good. That’s how democracy is supposed to work. And I am confident that the American people and America’s political leaders can come together in a bipartisan way and solve these problems. We always have.

We live in a serious time right now and we have the potential to deal with the issues that we confront in a way that will make our kids and our grandkids and our great grandkids proud. And I have every confidence that America in the 21st century is going to be able to come out on top just like we always have. But we’re going to have to get serious to do it.

I know that there’s going to be a segment of people for which, no matter what we put out, this issue will not be put to rest.  But I’m speaking to the vast majority of the American people, as well as to the press.

Thanks very much, everybody.'

There are tons of things very pressing at the moment; the national debt; Iraq; tornadoes in the South...you name it, we got it. But we were struck like by a sledgehammer with the following realization:


'If it was that 'easy' to present the long-form birth certificate to the American people last Wednesday, where was this 'real' thing 2.5 years ago when it all first started to swirl in the primary battle between Obama and Hillary Clinton?'

If this was not such a 'big deal', why didn't President Obama just present it during the 2008 campaign and wash his hands of the whole thing then and there?

To top things off, there is the very inconvenient issue of Lt. Colonel Terry Lakin.  LTC Lakin, who is a highly-decorated 18-year Army doctor, refused to be deployed overseas because of his view that the lack of a valid birth certificate by President Obama negated his ability to be Commander-in-Chief. Because of his very strong beliefs, he was court-martialed in December, 2010 and subsequently sent to prison for the past 6 months.

Now this 'real' birth certificate magically appears out of nowhere after he has been languishing in prison for the past 6 months....a decorated American military officer, in prison, for the past half a year? What is this honorable military officer supposed to do to get those 6 months of his life back now that President Obama has supposedly presented his 'real' birth certificate 'this time' out of his magic hat as opposed to not doing so previously which led directly to LTC Lakin's incarceration?

There may be an entirely plausible reason why President Obama's parents wanted to get his birth announced in the Hawaii paper in 1961 if he had, in fact, been born overseas. They might have wanted to insure that he was going to get the benefits of being an American citizen regardless of whether he ever ran for President and won. (What were the chances of that happening anyway? They should have called Las Vegas as well at the same time) Remember, Hawaii only became an official US state in 1959 and the operations of the new state could hardly have been very efficient or thorough without computers back in those days.

We get that. His parents might have been doing what any other caring parent back then, or even today, would have done: Try to insure that their offspring gets to enjoy life with American citizenship status. That is still golden in the eyes of most of the world.

Our take is that elected leaders should just put the truth out there and not try to get too cute with it all. The American people can 'handle the truth' but they have a very hard time accepting repeated lying. Bill Clinton could have accepted his responsibility in the Lewinsky matter at his first press conference instead of wagging his finger at us all; avoided an impeachment process and asked for the American people's forgiveness...and they would have given it to him.

We are a very forgiving society that extends second- and third-chances like no one else and America loves it when people get off the ground, straighten up and fly right and make momentous comebacks.

This sort of extended delay, legal maneuvering and clever statement-giving on the part of President Obama and his team just brings to mind the following scene:

'Curiouser and curiouser!' cried Alice (she was so much surprised, that for the moment she quite forgot how to speak good English)' when she fell into Wonderland.

Same thing must happen when people get elected to the White House. It is just plain 'weird'.
Posted by Frank Hill at 5:33 AM