Who Should Get ‘Paid’ More: Big Bird or President Obama? 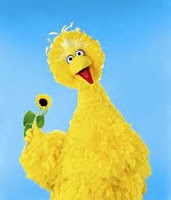 Since we are getting down to the ‘nut-cuttin’ (don’t ask) of finally realizing we are spending way, way, way too much money on things that are not absolutely critically essential to the health, wealth and safety of the United States of America, what do you say we take a closer look at PBS, the Public Broadcasting System?

PBS has undoubtedly brought us many things that have enriched America and helped educate our children back before there was cable television and video games.  ‘Masterpiece Theatre’ and several of their excellent drama presentations are second to none.

But when you think of PBS, what do you immediately think of?

Yes, you are right. 'Big Bird' and 'Sesame Street'.

What kid growing up after 1969 can’t remember Oscar the Grouch, The Count, Bert and Ernie, but especially Big Bird?  What parent can’t remember plopping their infants in front of the television set to be amused for an hour or so while they cleaned up the house or maybe even took a short nap to catch up, perhaps?

My sister sat next to a guy and a box on an airplane one time.  When she asked what was in the box, Caroll Spinney started talking in his high 'Big Bird' voice and opened up the box to show her Big Bird's costume since he was 'the guy' inside of Big Bird from the beginning. Being a great first-grade teacher, Nancy was thrilled to meet 'them' both.

Back when there were only 3 main networks, ABC, CBS and NBC, perhaps there was a pressing public need for higher-level, ‘educational’ television back then.

But is that true today when you can get a satellite package of 5000 channels ranging from ‘educational’ television such as The Smithsonian Channel to The Discovery Channel, all paid for by subscription and ad revenue?

We think the time has come to pull the plug on taxpayer-financed kiddie and educational television, sad as that might be.

And instead of running their telethons to raise money for the PBS network, they will just have to start running ads like the 5000 other distributors of entertainment and informational content do every single day in America.

Big Bird and Sesame Street are nice to have when things are running great in the economy and our budgets are in balance.  Neither is true today.

But if the thought of never having ‘Sesame Street’ come into your house again from PBS disturbs you (don’t worry, Lifetime Network or the Oprah Winfrey Network will scoop it up in a second), here’s some facts that might seal the deal when you are struggling to make your own tax payments to Washington and keep your job and house, in that order:

The President of the United States, Barack Obama, makes around $400,000 and has a free place to live with all expenses paid.

Members of the Senate and House make around $174,000 per year, without any housing allowance.

Seriously.  Is having Big Bird and Sesame Street on the tube at taxpayer expense absolutely essential to the national security and fiscal well-being of this nation?
And why are we paying what are essentially ‘public servants’ who run PBS 50% more, 100% more or triple the amount we are paying the President of the United States of America?

That would be like in 1789 paying some editor of a newspaper supported with taxpayer funds triple what we paid George Washington to be President then.

Computer says: 'This don’t add up!'

It is time to cashier Big Bird and Sesame Street from the stream of taxpayer dollars and wean them off the public dole.  You will be surprised how fast both will be snapped up by other networks and close to $422 million per year in funding for PBS will be saved, finally, for the American taxpayer.