Popcorn And The County Courthouse 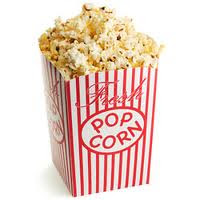 Make sure you go to the ‘jury selection’ at the local County Courthouse when your name is called and sit through the entire process. (You have to go otherwise or you will be arrested for failure to do your civic duty)

There are plenty of questions we now have about the jurisprudence part of our civil government ranging from the cost of it; the efficiency of it to the very notion of whether a ‘trial by a jury of your peers’ has turned out like the Founders envisioned.

It turns out that the term 'jury by your peers' is not in the Constitution. The only thing we can find in the Constitution relating to the tedious process of juries is the 6th Amendment right to a ‘speedy trial’ in the state in which the alleged crime was committed and to be judged by an ‘impartial’ jury.

‘A jury of your peers’ sounds more like being judged by people of the same race, social status or economic well-or-not-so-well-being.  Perhaps the more we all start sounding and acting like we are all ‘Americans’ first and not some hyphenated subdivision separated by race, gender or sexual preference, the sooner we will truly be able to have an impartial ‘jury of our peers’, our fellow Americans.

We have no problem with being called to serve on a jury.  It is part of being a free citizen in the greatest free nation ever concocted on the Face of This Earth.

But can we bring the process a little more into the 21st Century for goodness sakes?

This might have been the most colossal waste of time, effort and money since Geraldo Rivera opened Al Capone’s vault in 1986…and found nothing but dust in it.

326 people were basically ‘summoned’ to appear at 8:00 am Monday morning to assemble in the jury selection room where we were all briefed on what would happen during the day.  Depending on the number of trials going on in the courthouse, all of the 326 people could have been asked to sit on a jury and go through the weeding process leading up to actually listening to a court case for 3-5 days or so.

24 people got selected to one courtroom at 10:30 am.....and the rest of us sat and sat and sat like we are on some transcontinental flight to Vietnam where most people watched 2 movies and ate popcorn and turned the volume up to 50 so the others could barely hear themselves think.

And then we were dismissed at 4:50 pm like kindergartners....

So it winds up that 302 people were there for no reason at all, all day long, away from their jobs...and got paid $12/day (wow) plus parking is validated for probably $12/day.

Let’s say the average cost to the county was $30/day counting staff time and popcorn for the 302 non-essential jurors not used.  That is $9060 right there of totally wasted paid property tax dollars poured down the drain in one day!

This could be happening 4 times per month at just this one courthouse on each successive Monday.  That amounts to $36,000/month.

Times 12 months = $432,000 PER YEAR of taxpayer dollars to pay people to sit all day long waiting for some judges and lawyers to make up their minds as to whether they are going to: 1) go to trial in the first place; 2) need a jury and 3) or ask for a postponement so they can do it all again the next week!

These are the accumulated costs just for wasted parking validations and per diem for unused jurors to sit around all day watching movies and eating popcorn!

Here’s a suggestion: Why not use the technology available in 21st century America to make this a more efficient process and save the taxpayer some money from rampant property tax revaluations every 6 years or so?

There was not one person in that room who did not have a cell phone, Blackberry or an IPhone with 3G connectivity.

How do we know?

Because we heard and saw every single one of them talking on their phone, sometimes very loudly, during the day to someone at home, work or at play.

Why not have the lawyers and the judges get together on Friday afternoon and make a hard decision as to who wants a jury the next week; count up how many people need to be notified they may be called beginning Monday at 8:00 am…..and then let that number of people ‘be on call’ to come in when the jury selection actually starts, you know, sort of exactly like a doctor on call.

If they need you, they will text you and tell you to be at the Courthouse by noon that day. You will have been previously notified you will be ‘on call’ that Monday and will have had time to make arrangements at work and at home in case you are called for duty.

How much more clear can it be?

This is small potatoes in the grand scope of massive government spending but if we can save $432,000 per year at just one municipal courthouse, imagine the billions we could collectively save and not have to raise higher property and income taxes on every single taxpayer across the entire nation.

The only ones ‘hurt’ will be the popcorn makers! And the DVD vendors…but who is going to watch a movie on DVD in about 5 years anyway?

Use 21st Century Technology to save some money at the County Courthouse.  It is the only logical thing to do.