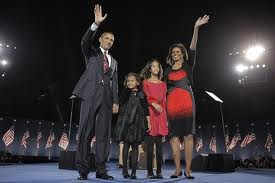 Recent reports trumpeted the news that President Obama’s approval ratings have fallen to 'only' 42% of the people approving of his performance in office.  50% of them say they 'disapprove' of his work so far.

With unemployment still in double-digits, millions of Americans out of work with many of them having zero chance of returning to their previous professions such as in residential or commercial real estate development anytime soon, gas prices rising to $4.00/gallon and beyond in many places around the country and now a third war front opened up in Libya, it is a wonder his approval ratings are still above 40% to be honest about it.

Carter hit 28% at one time.  Nixon in the midst of Watergate flat-lined at 24% before he resigned. And the all-time bottom-feeder was Harry S Truman in 1952 at 22%.

Thomas Jefferson and James Madison both left office at the end of their two terms in office with the public almost cheering to see them leave the White House.  Mister Jefferson and Mister Madison!  Fathers of Our Nation!  Imagine that!

What is it about US Presidents that make people not like them once in office?

But here is the deal:  Even with President Obama hitting ‘new lows’ in his approval ratings, he probably will win re-election in 2012.  In fact, if you want to actually make some money in this desultory economy, put some money down in Vegas and there is probably more than a 75% chance you could at least double your money as of Election Day, November, 2012.

‘What is that?’ you say.  “Even Michael Moore and the left-wing of the Democratic Party have turned tooth-and-nail against Obama for his foray into Libya!  Are you telling me that that means nothing when it comes to a presidential election?’

Two words to remember:  ‘History’ and ‘Inertia’.  Both are very important in American elective politics.

And both are very difficult to overturn when all things are considered and come down to a vote count total on a single day every 4 years.

‘How many sitting US Presidents out of our 44 total so far have been re-elected to another term while still sitting in the Oval Office?’

Now some of these presidents, such as LBJ, ascended into the Office of President upon the death of their predecessor.  So technically, they were not ‘re-elected’ to a second term but merely ‘elected to serve a second full term’.

Still, they got ‘elected’ once in office. That is the power of 'inertia', otherwise known as 'incumbency'.  It is very difficult to dislodge any incumbent in any elective office anywhere in the nation simply because they are 'familiar' to the voting public and they can communicate to their constituents relentlessly while in office.

How many POTUSes have not been re-elected to a second term since 1980, the time when most of the adults now living have been paying taxes and wondering when American politics was going ‘to be straightened out’ finally?

George Herbert Walker Bush 41 lost in a 3-way race in 1992 to William Jefferson Clinton who did not win a plurality of votes either since Ross Perot garnered 18% of the popular vote, mostly at the expense of Bush 41.  But Reagan served 2 terms; Clinton served 2 terms and W served 2 terms.

That is a .750 batting average for those of you scoring at home. Just that plain fact alone means Obama might have as high as a 75% chance of winning re-election in 2012 regardless of who he runs against.

It may seem like right now President Barack Obama is not ‘popular’ with the American people.  You know what would make him wildly ‘popular’ once again?  The unemployment rate falling below 5% and economic growth hitting 5-6% per year from now through 2012.

Presidents get the benefit of great economies and win.  And, rightly or wrongly, they get the brunt of bad economies, and they usually lose as a result.

So those are the key metrics to follow from here on until the 2012 elections are over:  the unemployment rate; economic growth rate; Obama’s approval ratings and his ‘hard’ re-election number.

If he is under 40% in either approval or re-elect come November, 2012, and the unemployment rate is still in double-digits, then we may have a new President for 2013.  But you have to beat an incumbent with a strong challenger, even in a bad economy, so who would that might be from the Republican side nowadays anyways?

If President Obama stays above 40% in approval and re-elect numbers, and the unemployment rate is around 8% and heading downward, we might see President and Mrs. Obama send their daughters off to a high school prom around about 2016 or so near the end of his second term as President of the United States of America.

Gotta admit, it would have to be pretty cool to have an after-party at the White House, wouldn't it?