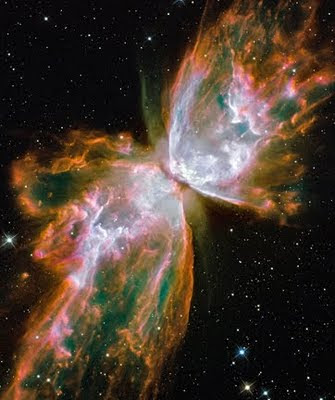 Longtime readers of Telemachus know that we have been even-handed and fair when it comes to ‘calling out’ (as the President says) politicians from both sides of the aisle when it comes to not stating the facts clearly and in a truthful manner.

We don’t think anything positive is going to be done on the fiscal front until the American public can get their hands and heads around the enormous facts and figures coming out of Washington in the federal budget.

As I was watching the speech Wednesday night, I found myself absorbing falsehood after falsehood until my head exploded like the “Butterfly” supernova as captured by the Hubble Telescope some 4 trillion years after the fact. (left)

So, Mr. President, please excuse this one deviation from being a polite observer on the sidelines….but you got it all wrong on the following accounts:
Wrong. CBO has already scored it as increasing the deficit by at least $239 billion more over the next decade under the most optimistic circumstances. The Lewin Group and other reputable health care forecasting firms calculate the new deficits from anything like this Obama health care bill to cost over $1 trillion in new deficit-spending.

We think it will be closer to $3 trillion. Why? Because every single health care bill that has ever been passed by Congress has wound up costing at least 3 times what it was originally “scored’ to cost by CBO and OMB. That is just the law of the federal budget jungle.
Intellectual jujitsu here. ‘You can not be serious!’ as tennis star John McEnroe would shout, and say ‘Medicare is great’ in one sentence but “it is so terrible that we have to wring $500 billion out of it in WFA” in the next sentence.

‘The Search for WFA’ has been going on in Medicare, Medicaid and the entire federal budget for centuries now and no one has found it yet…although we all know it is in there somewhere. It is as elusive to find and nail down as WMDs were in Iraq before we went to war over there.


Not true. There have been public and private estimates that if the public option is included, anywhere between 1 million and 100 million people will lose their private employer-sponsored health care insurance plans. How can anyone predict that not one single person will lose their health care coverage as a result of any change in federal law?

For one thing, paying the 8% penalty might wind up being far cheaper to a company than paying 15% of payroll costs for expensive ‘Cadillac’ plans as exist in the Detroit automakers plans. A corporate executive would have to be an idiot not to dump all of his workers into the ‘public option’ if passed. And leave the American taxpayer left holding the tab again.


We clap for the President with one hand on this one. After perhaps half a century of complaining from the physician/hospital community about how they are forced to practice expensive, wasteful ‘defensive medical practices’ to protect themselves from excessive litigation, huge awards and expensive settlements, it was nice of the President to offer a tiny little nod of the head acknowledging this basic underlying truth behind much of the health care cost escalation.

But why cast it off as maybe a ‘pilot project’ which you know will be centered around some small town in rural Idaho or Salinas, Kansas, for example, where lawyers in Gucci loafers don’t typically roam the countryside looking for lawsuits? Such a ‘project’ you know will take 5 years or more to collect all the sundry information and data and then a commission will be formed to further evaluate it. What a waste of time.

After this, my head actually did explode. I am just now putting it back together or else I would have listed perhaps 6 other ‘whoppers’ from last night’s speech.

Compare the tone of ‘calling you out’ with Abraham Lincoln’s almost biblical extension of the olive branch to the defeated Southern people near the end of the Civil War in his unforgettable Second Inaugural Address:

“With malice toward none; with charity for all; with firmness in the right, as God gives us to see the right, let us strive on to finish the work we are in; to bind up the nation's wounds; to care for him who shall have borne the battle, and for his widow, and his orphan--to do all which may achieve and cherish a just and lasting peace, among ourselves, and with all nations.”

That is the way to lead a nation towards solutions and consensus, Mr. President.
(picture used courtesy of news.cnet.com/i/bto/20090909/butterfly.jpg)
Posted by Frank Hill at 8:53 AM