Here’s The “Greatest Compromise’ Senator Ted Kennedy Should Have Achieved 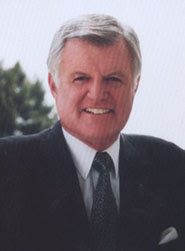 There has been a lot of talk this past weekend about whether now-deceased Senator Edward Kennedy of Massachusetts was the 20th century equivalent of the 19th century ‘Great Compromiser’, Senator Henry Clay of Kentucky.

Democratic republics in history always have relied on brave leaders who stand up to the major challenges of their time to work with other elected leaders to lead the public to a solution, be it in war or domestic policy. Henry Clay’s work as a compromiser earned him the name of ‘The Great Pacifier’ since civil war was averted by close to 40 years due to his diligent efforts in the US Senate.


We had a chance, one fleeting moment in history in 1998 when a truly “Great Compromiser’, as Senator Kennedy has been described lately, could have stepped forward as a true American hero to forge a compromise that would have saved us from the spectre of this $20 trillion debt now being bandied about. We could have had a massive compromise then that would have arrested the upward cost spiral in federal entitlement programs that now appears out of control.

Had Senator Kennedy done that, we might have personally led a fundraising campaign to etch his visage along with those of President Bill Clinton, House Speaker Newt Gingrich, Republican Leader Dick Armey and Republican Whip Tom DeLay on the next Mount Rushmore had they succeeded, as strange as that fivesome might seem today.

But they failed to seize the moment to do something truly great for our nation for a very simple reason as you will soon see and ruefully regret, for your sake and your generations to follow.

The one over-riding problem, national crisis really, that neither Senator Kennedy nor any other American leader over the past 30 years has been able to slay for good has been to address and redress the spiraling costs of federal entitlements, mostly the exponential rising costs of Medicare and Medicaid. Apparently, the excessive costs of these programs just didn’t concern or impress Senator Kennedy enough to tackle; he was content to pass expansions of both programs without much regard or concern for the costs that we or our children are going to have to pay down the road.

The ‘Golden Opportunity That Was Lost’ came in 1998 soon after the heels of the passage of the Budget Act of 1997 that led to the only 3 balanced budgets the vast majority of us Americans have ever seen in our lifetimes, or will ever see again. (Think about that for a moment and let that sink into your cerebral cortex some)

President Clinton and the Republican leaders in Congress were riding high on the heels of being able to come together and act like adults to compromise and pass the balanced budget act for the good of the nation.

Efforts began almost immediately behind the scenes on both ends of Pennsylvania Avenue to come together swiftly on a far larger, comprehensive entitlement reform package that would have finally structurally changed these programs before they break the U.S. Treasury.

Raising the age eligibility to more realistic levels, erasing the almost preposterous notion that billionaires such as Bill Gates and Warren Buffett must be included in entitlement benefits in order to insure their support for both programs (we estimate that both gentlemen pay their full contributions to FICA in, oh, let’s say, about 5 minutes at the beginning of each new year) and other fundamental reforms that absolutely must be passed by Congress to start the budget trend lines turning downward, not upward for generations to come.

And the whole monumental effort to save our national fisc was derailed by three words early in 1998: ‘Monica’, ‘Lewinsky’, and ‘Impeachment’.

What is that old saying about “For the want of a nail, a war was lost?”

That’s it and that is the truth. All of the goodwill and trust that had been engendered during the 1997 Budget Act effort just the year before was summarily tossed out the window into the Potomac River never to be seen again. We have been struggling with almost the total lack of bipartisanship, compromise and statesmanship in Washington ever since.

So when you hear stories about Senator Kennedy being a great legislative dealmaker, get on your knees and say your prayers that we will see a true ‘Great Compromiser’ come to the forefront very soon to deal with these exploding entitlements. It will most likely take another ‘Nixon Going to China’ moment where some extremely brave Democrat leader is willing to stand up to the AARP and say the future of this nation is more important than cow-towing to that supposedly non-political body and make the hard decisions we need to move forward.

President Obama could be that transformational leader if he takes up this challenge. Let's hope he is. Our nation needs him to be.
Posted by Frank Hill at 4:43 PM