The ‘Umbrella Rebellion' Over Health Care, 1989 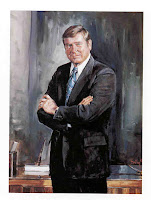 One of the unspoken truths about legislation at any level of government is this:

“If there is a hurry to get it done, it probably is not very good in the first place!”

If a bill can not stand the public scrutiny of the nation and its proponents can’t make the case that it is the best legislation for the nation as a whole through the mere power of thoughtful, intelligent persuasion, then it is not worth passing.

After all, isn’t this supposed to be a law that will be ‘for, by and of’ the people, not the professional politicians and lawyers who run Congress and all the legislatures nowadays?

If the professional politicians in Washington can’t explain this health care bill to us in terms we can understand, we do not want or need them to pass it in the dark of night under the cloak of secrecy and then come out into the light later and tell us what it means…when it is too late.

We tried that in 1988 under the aptly-named “Medicare Catastrophic Bill” a bill that hardly anyone still alive remembers anymore. When the most powerful man in Congress, Ways and Means Chairman Dan Rostenkowski went home to Chicago during the August recess break, angry senior citizen ladies chased him back to his limo and beat him over the head with umbrellas, they were so angry! (‘The Umbrella Rebellion”, it shoulda been called. see *Rosty* below)

Anyway, that bill was swiftly repealed in toto soon thereafter, further proving the old political adage that if you can’t explain it in 20 seconds or less, ‘it ain’t gonna fly!’

The intent of the bill was to provide funds to cover the truly catastrophic costs of the relatively very few seniors who experience the highest total cost of health care due to complications from disease and illness.
.
70% of the costs of health care each year are devoted to complications from just 4 illnesses; heart attack, stroke, diabetes and cancer. All of which are ‘preventable’ to some extent or another by better diets, less alcohol consumption, stopping smoking and getting some exercise.

70% of these costs occur in the final 6 months of a person’s life, although no one knows for sure when those last 6 months are going to occur.

When you have an annual budget of close to $500 billion for Medicare for seniors alone, (Medicaid covers low-income people), and many billions of it is spent on a very few number of seniors each year for the reasons described above, having pure catastrophic coverage makes a lot of sense.

If this is a stalking horse to get to a single payor plan, tell us, the American public…we can take it. Explain it to us in explicit detail with all the gory codicils clearly written out and posted on the Congressional websites so we can all download it and read it for ourselves. (As of this posting, much of the House pieces of the legislation have not been posted for public consumption)

If it is as great as the proponents say it is, the American people will come running to it with palm fronds waving and singing hosannas in the highest to anyone who votes for it.

But if it is still a lot of the ‘same-old, same-old’ expansion of federal power into the private health care insurance field as we have witnessed for the past 40 years, with little- to-zero cost containment or major league reforms in the tort (legal) area, malpractice insurance reform or protections against excessive costs through defensive medical practice, then the American people will smell right through that charade and organize umbrella rebellions all over the land.

Just ask Chairman Rosty about what it felt like to be beat over the head with an umbrella in 1989.

*(August 20, 1989--Washington Post, Mike Causey) 'According to the front page of the Chicago Tribune, he got it from angry senior citizens seeking a confrontation on Medicare premiums. The newspaper said he was "booed and chased" down a street after a meeting with a group of senior citizen leaders about the political situation in Poland. The Trib said, "Eventually the 6-foot-4-inch [Dan Rostenkowski] cut through a gas station, broke into a sprint and escaped in his car, which minutes earlier had one of the elderly protesters, Leona Kozien, draped over the hood."

Rostenkowski is viewed by many senior citizens as the chief architect of the new Medicare health insurance plan for catastrophic illness. It could cost some upper-income retirees $800 in a surtax payable when they file their 1989 taxes.

Many also see him as the Lone Ranger holding up a Senate-House stampede to revise or repeal the surtax. His Senate counterpart, Lloyd Bentsen (D-Tex.), got so much heat from retirees that he agreed to revise the issue, setting the stage for possible changes in the surtax."
Posted by Frank Hill at 7:51 AM